Earlier this year we checked out the Nabi Big Tabs, which are high end kid-friendly Android monitors that can have up to a 65″ 4K display. If you’re looking for a more affordable, portable or versatile alternative, Touchjet’s Pond pico projector seems like a good bet. 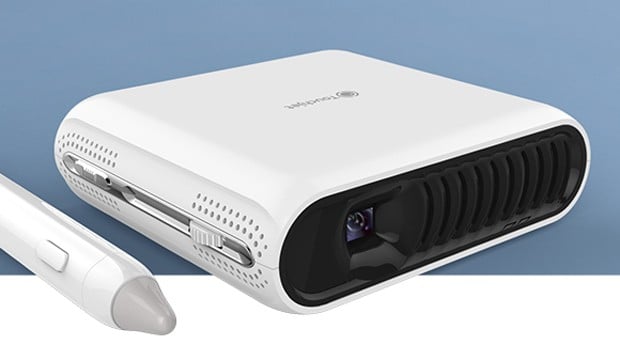 The Pond was funded by Indiegogo backers last year (it was called the TouchPico at the time). It has an 80 lumen LED lamp and a built-in infrared sensor that allows it to track the bundled infrared styluses. The styluses are each powered by two AA batteries and can be used directly or hovered slightly above the projection surface. The Pond comes with two styluses and a Bluetooth remote control that can also be used as an infrared mouse, but TouchJet says the Pond can recognize up to four different styluses at once. 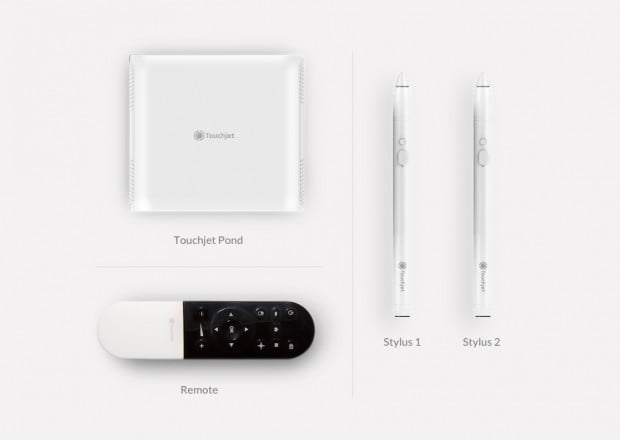 The Pond runs Android 4.4 and has a 1.9Ghz dual-core CPU, 2GB RAM, Wi-Fi and Bluetooth connectivity, 3.5mm audio out, HDMI input and micro-USB input. In other words, it’s a medium range Android device. But its main perk is its portability. It measures just 4.5″x 3.9″x 1.1″, weighs just 9.4oz. and its internal battery lasts up to 2 hours. Although you’ll have to bring the styluses and remote along to make full use of it, the Pond does come with a carry case that has room for all of its components.

The Pond’s size and price point does mean that it has significant drawbacks. For one, even though it can project up to an 80″ screen at 16:9 aspect ratio, the projected display has a modest 854×480 maximum resolution. The use of infrared for detecting touch input also means that the sensor needs an unobstructed line of sight to function. As IT Pro stated in its review, “This means you have to stand off to the side, which can be a little awkward and uncomfortable.” That said, the Pond’s touch detection is quite responsive, as you’ll see in the user review below. Finally, the Pond only has 20GB internal memory, a 4GB flash and a 16GB internal SD card.

Here’s a good unboxing and review video of the Pond by one of its backers, YouTuber Renard Bleu. Skip to 4:08 for the demo.

You can order the Pond directly from TouchJet for $599 (USD).

[via Gadgetify, IT Pro, The Next Web & Projector Central]