Redditor themcv put together a Pip-Boy 3000A replica for a lucky friend. Based on selectnone’s RasPipBoy user interface, themcv’s replica can show your location on Google Maps and do a couple of other things, all in the classic green monochrome graphics of the Fallout item. 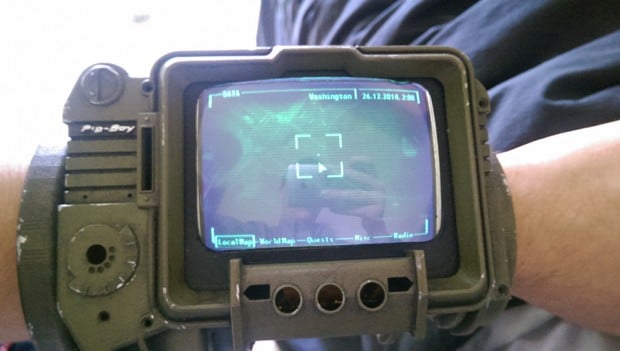 The replica’s case is a 3D printed one from Nakamura Shop, the screen is from Adafruit’s 3.5″ 320×240 TV and the brain is of course a Raspberry Pi running on the aforementioned UI. It’s not quite finished though. As you can see there are no buttons or knobs on it yet.

It’s also not entirely portable. It’s meant to be worn with a Vault 101 jumpsuit that has room for the Raspberry Pi and batteries, which are both wired to the rest of the electronics inside the Pip-Boy case.

If smartwatches were as cool as this I would’ve bought one by now.

NECA 1989 Batman Grapnel Launcher: Ever Dance with the Devil in the Pale Moonlight?
Home Subscribe vis RSS Feed
« Previous
Next »