Earlier this year, we checked out a primitive LEGO 3D printer that used melted glue as its ink. MOCer Jason aka JK Brickworks has also been working on a specialized LEGO 3D printer. His Bricasso turns pixelated drawings into LEGO mosaics. 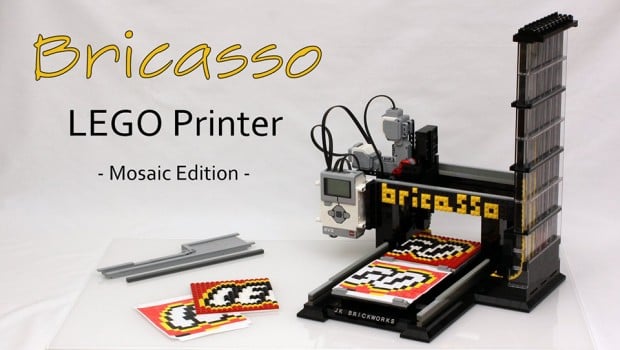 The Bricasso uses a Mindstorms EV3 color sensor to analyze illustrations. Jason originally hoped to convert any drawing into a pixel mosaic, but because of the color sensor’s limited precision he had to settle for a setup that required pre-formatted and pixelated illustrations.

After the printer has analyzed an illustration, it will then replicate it by picking and placing 1×1 plates over a baseplate. The 1×1 plates are stored in gravity feeds that can hold a total of 450 plates. There are nine separate feeds, which means Bricasso can print in up to nine colors, or 10 if you count the baseplate’s color.

I wonder if it’s possible to incorporate a 3D scanner into Bricasso and have it replicate objects with LEGO. Imagine that – a LEGO enthusiast made of LEGO.