I can’t help thinking that The Electric Knife Orchestra is the beginning of a robot that kills by chopping humans into pieces to a catchy soundtrack. Like, say, the Bee Gee’s Stayin’ Alive. Yeah, this is some creepy stuff. Stop creating sharp things that can kill us people. 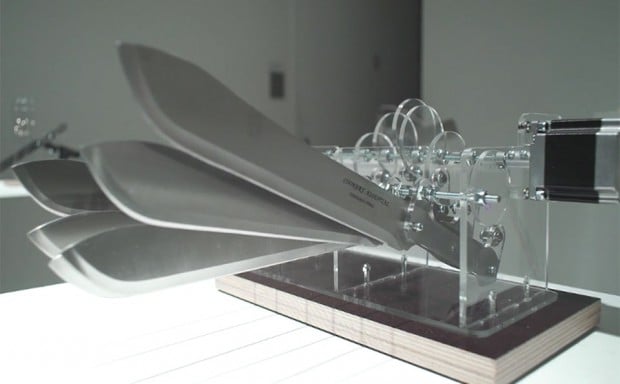 Electric Knife Orchestra is an art installation by Neil Mendoza at the UCLA Department of Design Media Arts in Los Angeles. At least that’s how it is starting it’s life. I wonder if it has chopped off its first finger yet. Anyway, for now sixteen knives and a meat cleaver make up the orchestra and they are paired with an Arduino and other instruments, like bells, stepper motors, a triangle and more.

According to its creator, it has already had a taste for blood. “Working with knives was a new challenge,” says Mendoza. “After a couple of days of getting little cuts all over my hands I covered most of the blades with tape.”

Dismantle it now before it is too late!