R2-D2 Drone Takes to the Skies

I love Star Wars and have since the ’80s when all I ever wanted for Christmas was all the toys – all of them. I never understood why Santa couldn’t get that right. I mean, I got the Ewok treehouse play set, but no Ewoks and no walker to crush with tree trunks. That most definitely isn’t all of the toys. I’m not such a big fan of the prequel trilogy, but it was cool to see R2-D2 fly with his rocket legs. 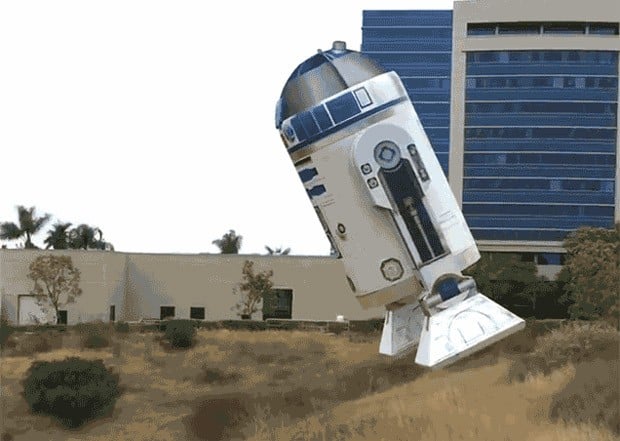 This flying R2-D2 drone reminds me of the new trilogy with a very realistic, if slightly too large, reproduction of R2 that looks very good. It doesn’t fly using rockets on its legs; rather it has a quadcopter hidden inside.

The domed head of R2 is made using a plus configuration with flat pieces of material of some sort to let air move in and out so the drone can fly. It’s awesome and comes from Otto Dieffenback, the same geek who created that awesome flying Snoopy doghouse we talked about yesterday. If you are visiting Comic-Con in San Diego, watch out for R2 to be flying around.