KFC is slowly trying to replace all the snack foods we know and love with KFC-ified versions of those treats. We have seen the restaurant replace the bun with a pair of chicken breasts. More recently, a chicken breast became the bun for a hotdog with the Double Down Dog. Now KFC has replaced a pizza crust with a chicken breast. 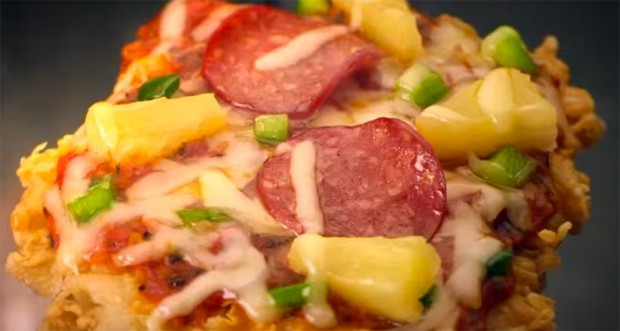 KFC has rolled out the strange concoction in the Philippines, and it’s called the Chizza. They flop down a chicken breast, top it with some tomato sauce, pepperoni, pineapple and green peppers.

It looks very weird. It might taste good though. Slap some BBQ sauce on it rather than red sauce, thrown on some cheese and bacon and I’d totally eat it. What do you think? Would you try this pizza monstrosity?