We’ve seen floppy drives and hard drives used to make music, but laurens.weyn’s Unconventional Instrument Orchestra can use “pretty much anything with steppers, or anything that makes noise on a signal pulse as percussion.” That includes hard drives, and floppy drives along with 3D printers, CNC machines and even doorbells. 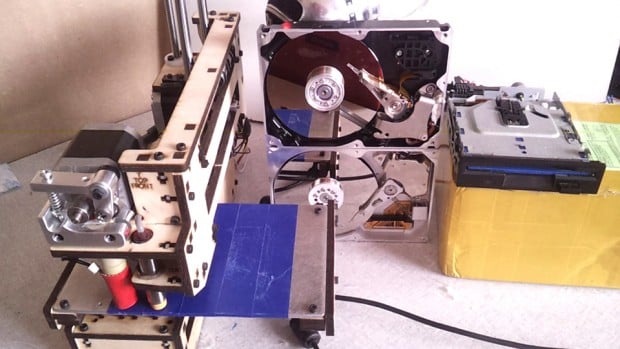 While it’s fun to watch the hardware play, laurens.weyn admits that the real star of his project is the Java program that he wrote. “This program was by far what took the most effort in this project, as it has to parse MIDI files, make adjustments through an interface, and send instructions to the various instruments to play their parts while providing a synthesia-style music visualisation in real time.” The orchestra is run by a PC and a Fubarino SD; the latter is needed to control floppy drives and hard disk drives.

Laurens.weyn knows what you’re thinking. “Do you think YOU’RE tired of hearing this song? Do you know how many attempts this took to get working? Too many!” Check out his Hack A Day post for more on his project. You can see more of the Unconventional Instrument Orchestra’s performances on his YouTube page.