Last year, I had the opportunity to go hands-on with the Microsoft Surface Pro 3, and thought it was an excellent system – offering performance, great battery life, an amazing screen and both tablet and laptop capabilities in a single system. But with prices ranging from $799 to $1799, the Surface Pro 3 isn’t exactly inexpensive. The Microsoft Surface 3 aims to offer many of the features that make the Surface Pro 3 so appealing, but at a more accessible price point. In fact, the Surface 3 starts at just $499, and is more than sufficient for most users. 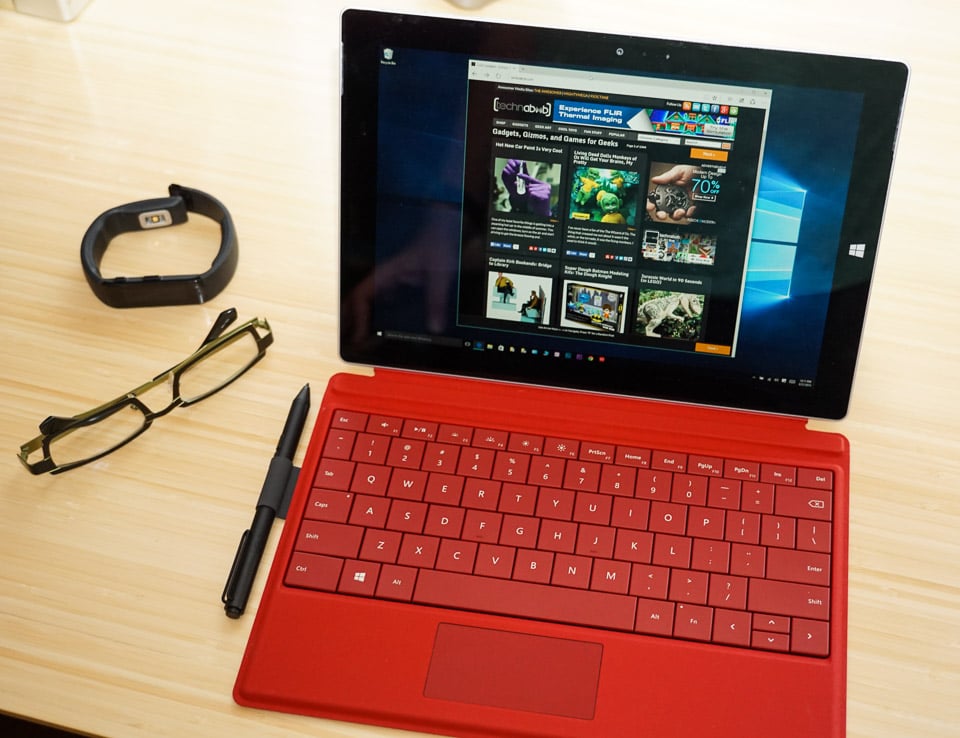 Microsoft positions the Surface 3 against the iPad Air 2, and I guess that makes sense, given the pricing. But the Surface 3 is a far more capable content creation device than Apple’s tablet, which is best used for consuming content. Like its fancier brother, the Surface 3 works as both a tablet and a laptop, though in the case of the Surface 3, it’s got a 10.8″ display versus the 12″ display on the Pro. The 1920×1280 resolution display is extraordinarily crisp and distortion-free on the Surface 3. 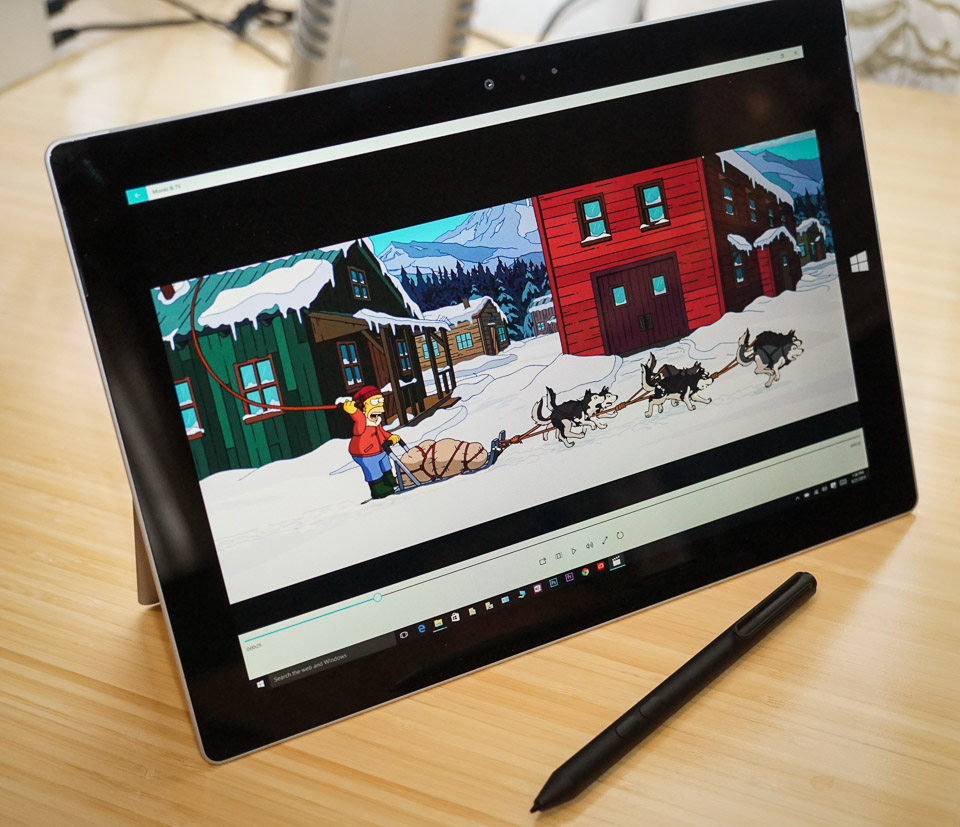 The Surface 3 measures just 10.52″ x 7.36″ x 0.34″, and weighs in at just 1.37 lbs (without a keyboard cover), so you’ll barely notice it in your backpack or briefcase. One thing I noticed is that its magnesium alloy body isn’t as scuff-resistant as the Surface Pro 3. I learned this the hard way by scuffing up the back of the system by having it pressed against my iPad’s Smart Cover in my backpack, proving yet again that Apple doesn’t like Microsoft honing in on its territory. That said, I recommend keeping this system in a padded sleeve all by itself, or purchase a vinyl skin for it. 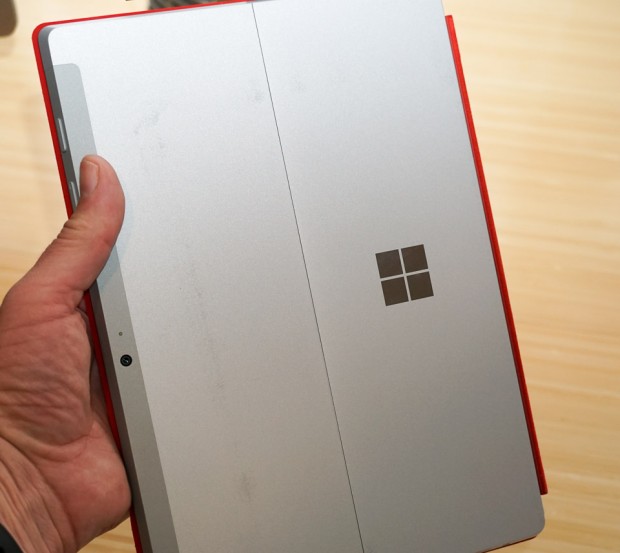 The back of the system has a three position kickstand, which doesn’t offer the same flexibility as the Surface Pro 3, but gets the job done. I couldn’t get it to the exact angle I got used to with the Pro, but it didn’t take long to get used to the angle I chose. 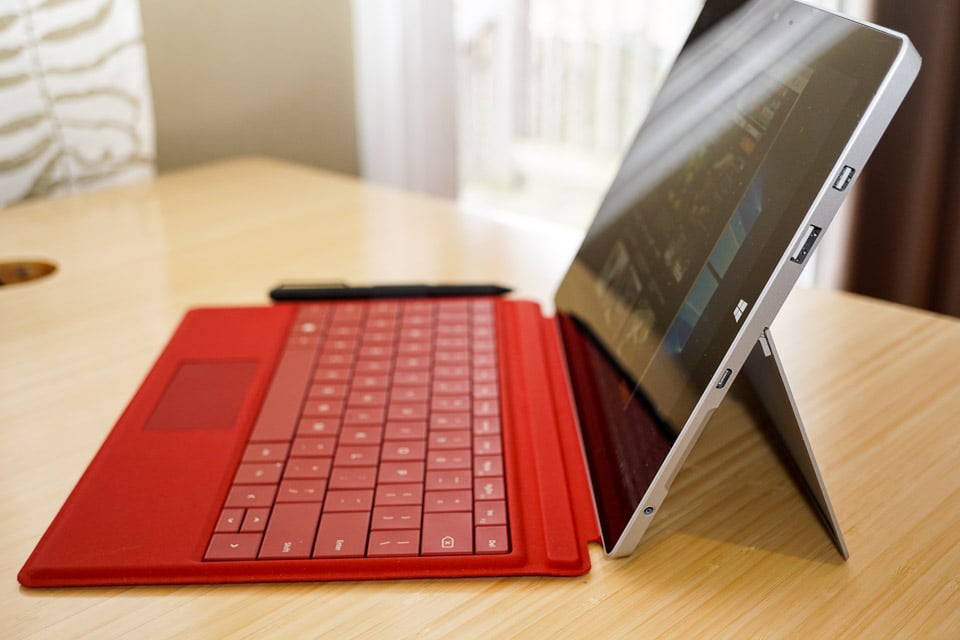 Surface 3 systems come with 64GB or 128GB of SSD storage, and either 2GB or 4GB of RAM. One place where the Surface 3 actually trumps the Surface Pro 3 is the availability of on-board 4G LTE connectivity from AT&T. The review unit described here is the 64GB/2GB/4G model, which retails for $599. Microsoft also includes a 1-year subscription to its Office 365 Personal suite, which includes Microsoft Word, Outlook, OneNote, Excel, Publisher, Access, and PowerPoint and 1TB of online storage.

While it’s not the fastest CPU on the block, the 1.6GHz quad-core Intel Atom CPU in the Surface 3 turned in respectable performance. In my testing with a variety of applications, ranging from the Microsoft Office suite to Adobe Photoshop, the system ran quite well. Playing back full 1080p video was no problem, without a dropped frame in sight. The only place where I ran into a hiccup was attempting to edit 4K video in Adobe Premiere, which is a challenging task for all but the fastest machines. I was able to edit 1080p video just fine, though rendering finished compositions was quite slow – about 12 minutes for a 90 second full HD video. I could also see the amount of on-board storage being a limitation for video work. 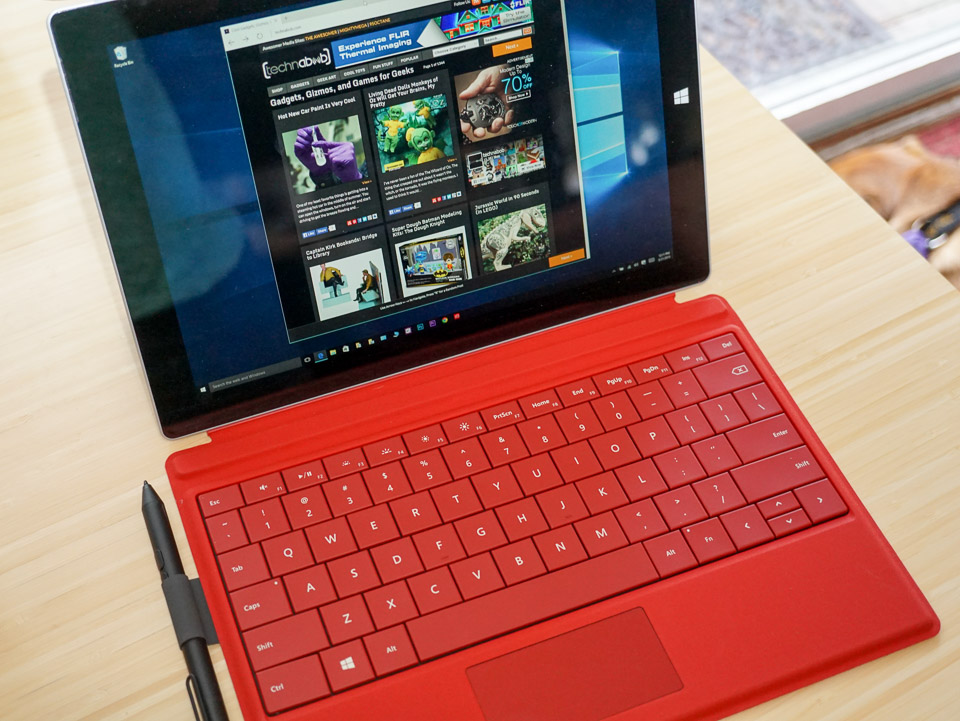 If you really want to get the most out of the Surface 3, you’ll want to pick up both a Type Cover ($129.99) and the Surface Pen ($49.99). Assuming you regularly compose e-mails, write documents or create spreadsheets, having a tactile keyboard is really great, and the Type Cover offers real keys along with protection for the Surface’s screen in a single, slimline package. The keys are a little cramped if you’ve got big fingers like me, but better than many smaller laptops I’ve used, and certainly way better than typing on a touchscreen. For creative folks and note-taking, the Surface Pen is really handy. It lets you sketch on screen, and even recognizes pen pressure. When used with the bundled Microsoft OneNote app, you can take handwritten notes, and annotate them with images, tables, links and more. 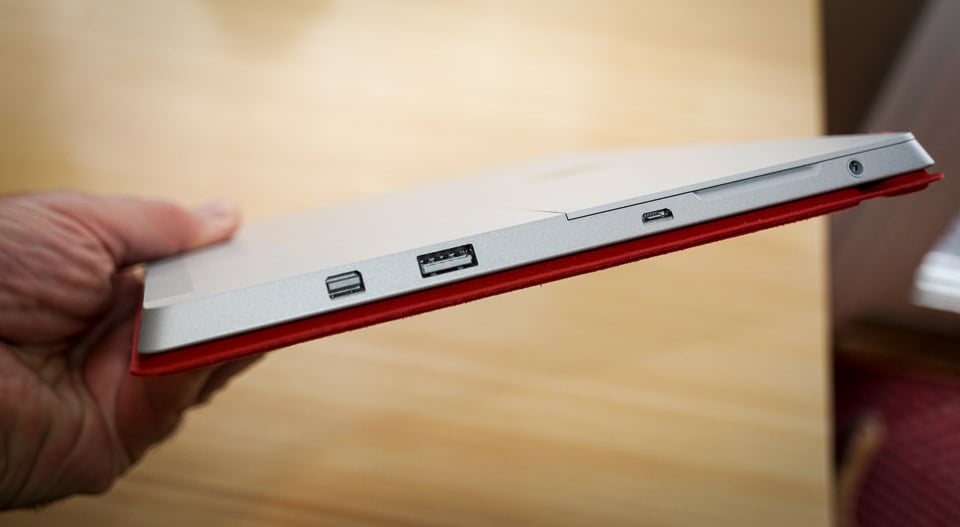 Another big win for the Surface 3 compared to Apple’s tablets is its connectivity. In addition to Bluetooth, Wi-Fi and LTE, you get a full-size USB 3.0 port, a Mini DisplayPort for connecting up to three external monitors, and a microSD card reader – which came in handy more than once when I wanted to move files from my GoPro onto the Surface. I also like that the charging port is a standard microUSB port, versus the proprietary (albeit cooler) one on the Surface Pro 3. You also get a 3.5 megapixel front-facing camera and an 8.0 megapixel on back, as well as a microphone and stereo speakers with Dolby audio. If you opt for the LTE model, it’s also got GPS support, so you can use it for navigation.

Battery life for the Surface 3 is rated at up to 10 hours of video playback, though with typical computing use, and a mix of Wi-Fi and LTE connected web surfing, you can expect somewhere around 8 hours – a pretty impressive number. 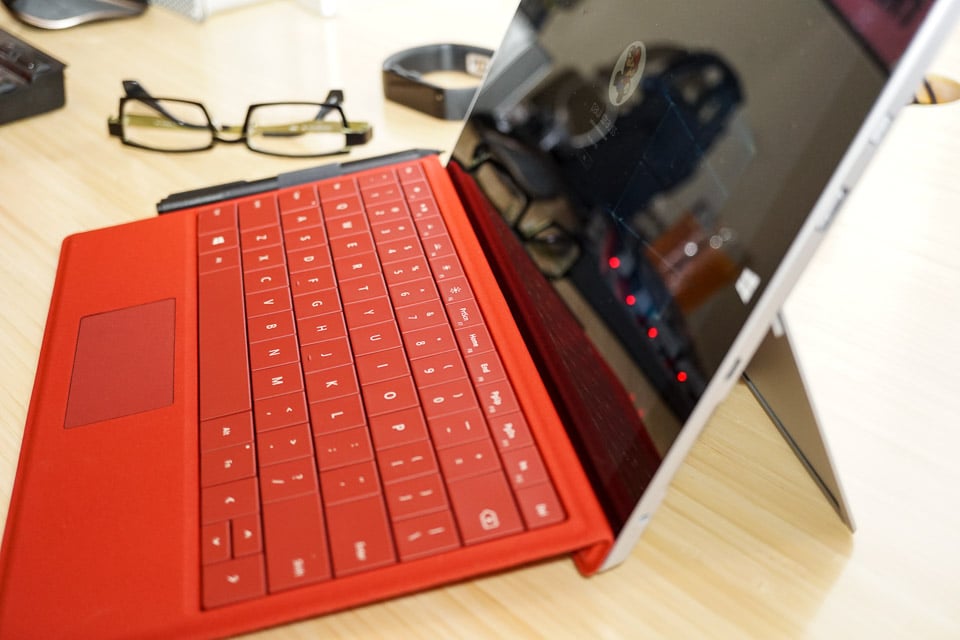 In the end, the Surface 3 is a excellent tablet/laptop hybrid. It offers good price-to-performance value, and is quite versatile, giving you the best features of a tablet, with access to the full suite of applications that Windows has to offer. With the recent upgrade to Windows 10, the system is even more user-friendly and useful. While it won’t be fast enough to play most video games, or perform CPU/GPU intensive tasks like UHD video or 3D rendering, the Surface 3 is a great everyday machine for students, family users, and business professionals. If you need a faster machine, then the Surface Pro 3 is always out there.

[FTC Disclaimer: Technabob was provided with the hardware tested in this review by Microsoft at no cost. However, all reviews on our website are the unbiased opinions of our authors, and in no way represent the views of the product manufacturers represented here.]