For the longest time, I thought of Microsoft primarily as a software company. But over the last couple of years, they’ve released some really good hardware that can keep up with the best players in the market. Between the Surface, the Xbox One and Lumia phones, they’ve really come into their own as a serious hardware player. I’m happy to say that the Microsoft Band is right up there as a solid piece of hardware, balanced with very good software. 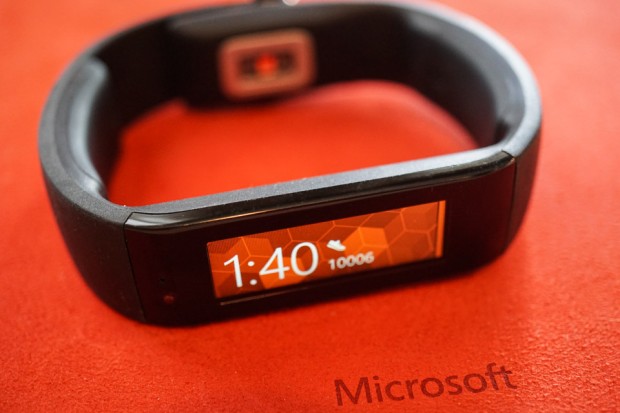 Sold first and foremost as a fitness tracking device, the Microsoft Band is a very capable smartwatch, that does almost everything that its much pricier competition from Apple can do. The Band itself is designed to be clean and minimal, so it’s not exactly a fashion statement, but it is very good at what it sets out to do and provide just about every feature you’d ever need from a wrist wearable. The design is unisex and works on either wrist without a problem. The only choice you have to make is whether to buy a Small, Medium or Large model based on your wrist size. Oh, and you can also customize the color of the display and its wallpaper background. 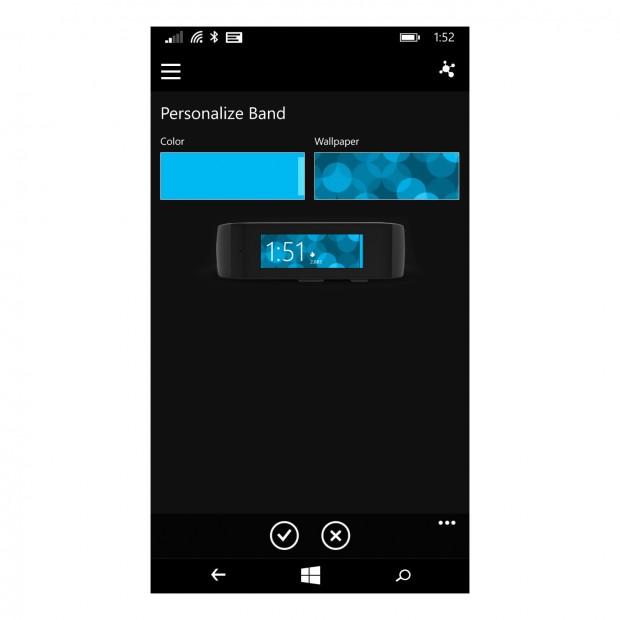 Setting up the Band is simple – just install the Microsoft Health app on your smartphone (Windows, iOS or Android), and pair it via Bluetooth. Unlike some smartwatches, you’ll spend time in both the app and using the screen on the Band itself, thanks to a smart application of Microsoft’s Tile UI and an intuitive touchscreen interface. For purposes of this review, all testing was done using a Microsoft Lumia 640XL smartphone, so your mileage may vary on non-Microsoft devices. In addition to viewing your data in the various apps, you can also log in to the Microsoft Health online dashboard to view your fitness history. 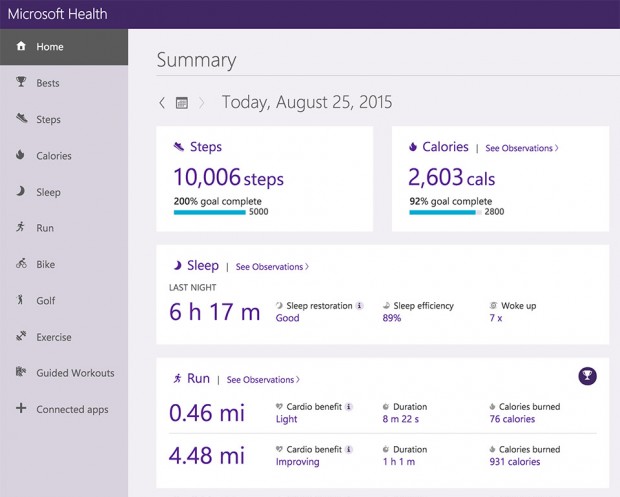 One of the first things you’ll want to do on the watch is activate “Watch Mode” in the settings. This activates a low brightness time and date display which is on at all times. It uses surprisingly little power, and makes the Band much more friendly as a watch, since the time is always displayed. It takes a few minutes to adjust to reading the time sideways, but once you get used to it, it’s just fine. 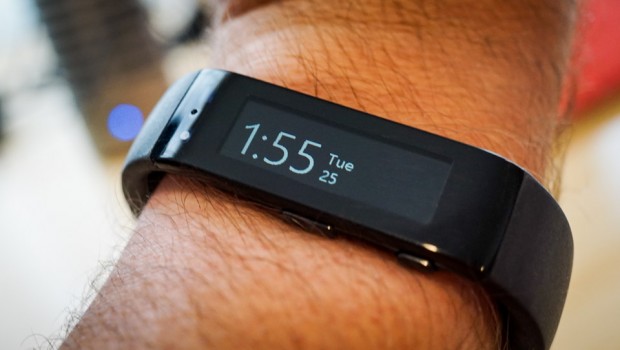 When you want to view the full Band interface, simply press the large button on the side, and the display lights up. At this point, the touchscreen is active, and you simply swipe to access the various app tiles on the Band. 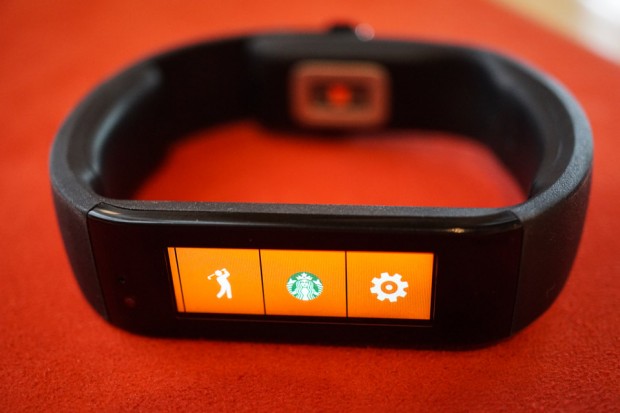 Out of the box, you get tiles for tracking a variety of activities, as well as email, messages, phone call notifications, calendar, sleep tracking, alarm clock and more. You can enable extra tiles for social media, a UV exposure checker, and even a Starbucks payments that displays a barcode for paying for your coffee, and you can reorder the tiles in the Microsoft Health app. Third parties are also making apps for the Band already, and you can browse those on the Microsoft Store. These apps can interact between Windows Phones and the Band. For instance, I played with one where you can use the Band as a musical instrument and play air guitar, while the sounds come out of your phone. Gimmicky, but fun. 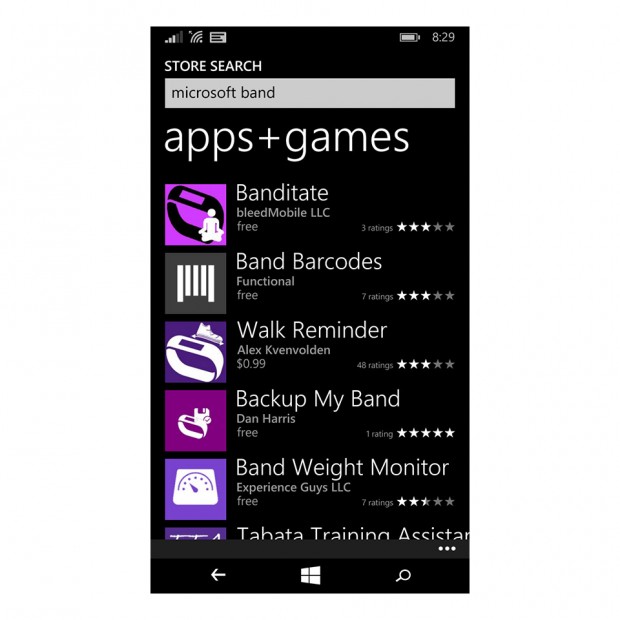 Of course, the number one reason most people buy a smartwatch is for fitness tracking, and the Microsoft Band is quite adept at that. By default, the Band tracks all of your steps, calories burned and heart rate automatically. To start a workout, you simply swipe to the proper tile on the screen, and hit the smaller “Action” button to start and end fitness tracking. 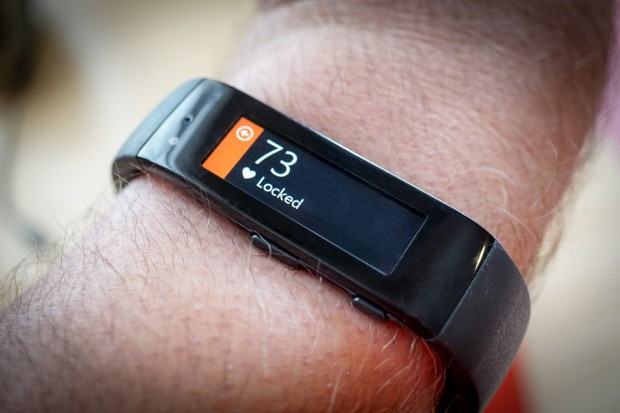 Running and fast walking are my activities of choice, so I spent the most time in the Run app, which tracks steps, mileage, calorie burn, pace, split times, and heart rate. Throughout your run, the watch notifies you every time you tick off a mile, displaying your progress on screen and alerting you with haptic feedback. 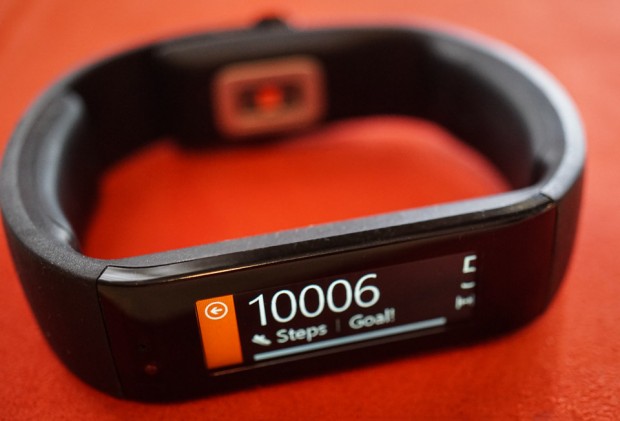 Run tracking is most accurate outdoors when you enable the battery-hogging GPS, but I managed to get good results on a treadmill as well, with the Band only falling 5% short of the mileage that my treadmill reported after a full hour workout at varying speeds. However, I wish there were a setting for stride length so it could be even more accurate at calculating mileage without GPS. 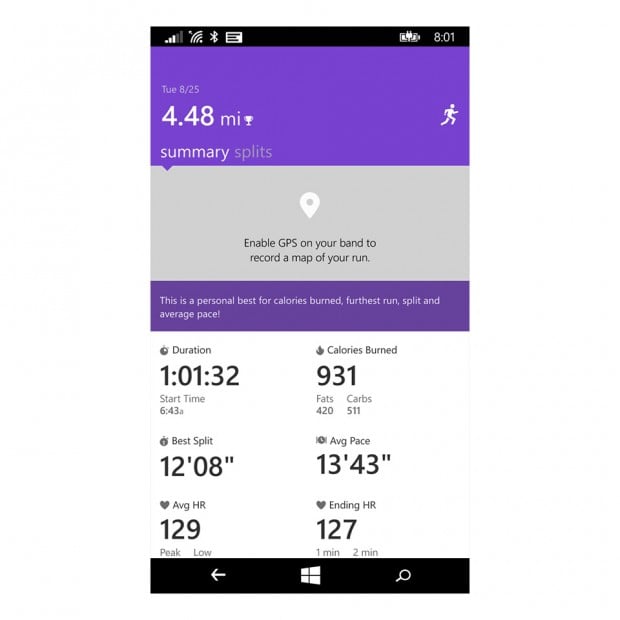 One unique feature is something called “Guided Workouts.” This library of workout plans can be downloaded to your Band, and will walk you step by step through a routine, while tracking your progress. These plans can include gradual ramp-ups in difficulty over time. It’s not as fancy as it sounds (I was hoping that maybe it would offer voice based guidance) but it is a nice way for beginners to add structure to their workouts. 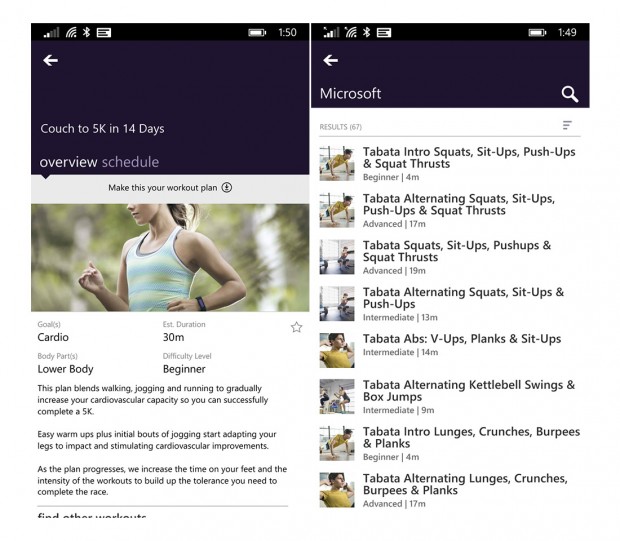 In addition to runs and walks, the Band can track bicycling (including elevation changes), general workouts, and even has a Golf mode which can keep score when you hit the links. I didn’t get to test this mode, but it definitely sounds neat, with the ability to load up your favorite courses, track your score and fitness stats, as well as provide distance to the front, center and back of the green. Keep in mind this activates the GPS, which will drain the battery quickly.

One of the Band’s other very useful capabilities is Sleep tracking. Just wear it to bed, go into the Sleep tile and hit the Action button when you’re ready to go to sleep. You’ll be able to see how much sleep you got and the overall quality of your rest. 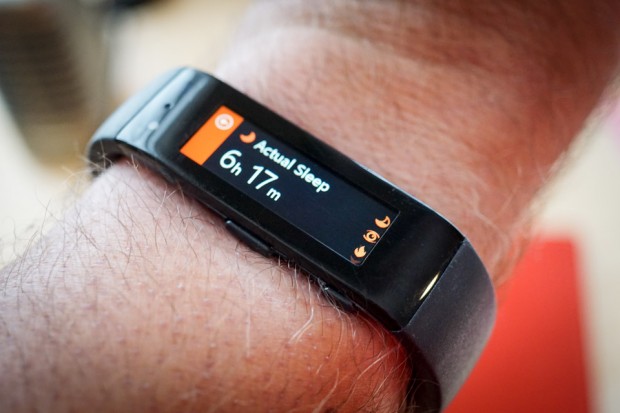 The Health app provides details on the different states of sleep, when you woke up, and even how long it took you to doze off. 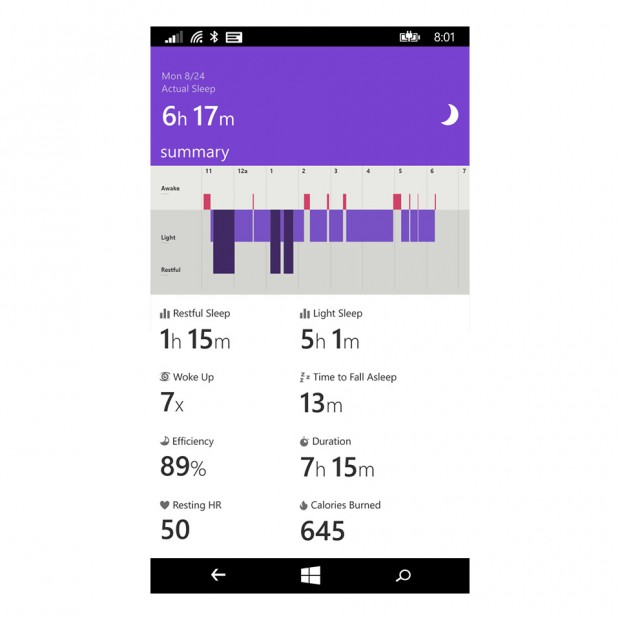 Call notifications, email excerpts, messages and news are quite legible on the high contrast TFT LCD display, and read by swiping to the left to view the next message, or swiping down to scroll. Press the Action button on any message, and the Band will display it word by word so you can read it without scrolling. 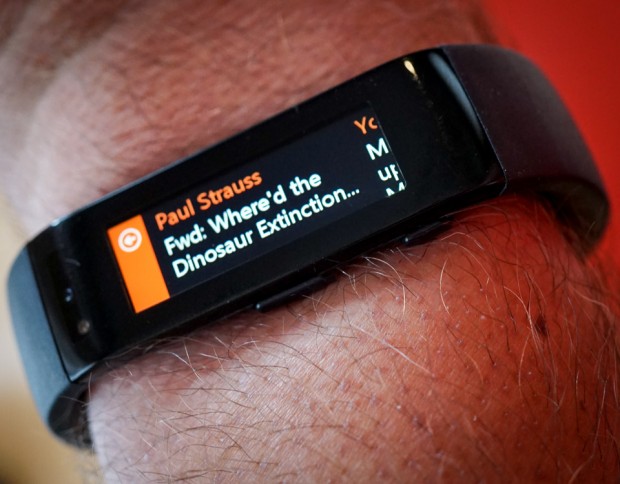 You can only view excerpts of emails, and can’t reply to them. However, there’s full text message functionality. Choose from a voice reply, a canned message, or you can even type a reply on the surprisingly functional tiny on-screen keyboard. I wouldn’t want to write a lengthy message with this thing, but for a quick, custom response, it’s handy. 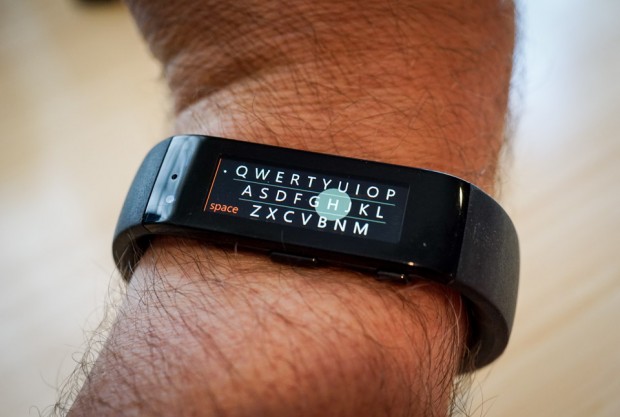 Charging the Band uses a proprietary magnetic cable that quickly, yet firmly attaches to the back of the watch. In my testing, battery life is just under two days with normal use, but you’ll only get about 3 to 4 hours with the GPS on. A full recharge takes about 2 hours, so I found that charging the Band from time to time during the work day was best so I could wear it at night for sleep tracking and while I was out and walking about. 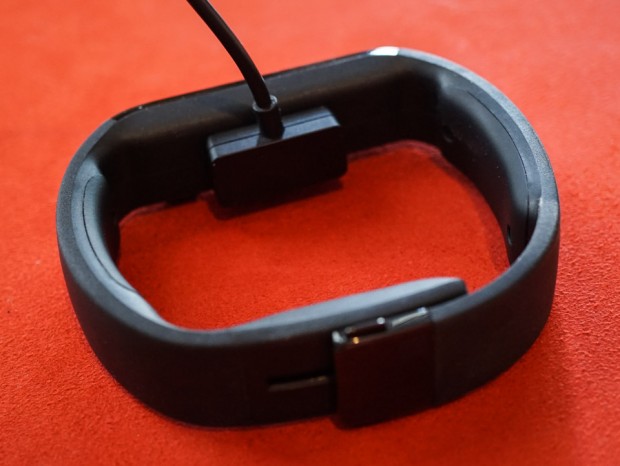 Microsoft has created another great piece of hardware with the Band. For their first entry into the crowded fitness band and smartwatch market, the device is well built, intuitive and feature rich. Unlike some of the other devices on the market, it also offers great integration between its hardware and software. Priced at just $199.99 it’s also a great deal in comparison to the Apple Watch, yet has longer battery life, and can do sleep tracking too. Other than NFC payments, it does everything else Apple’s device does. 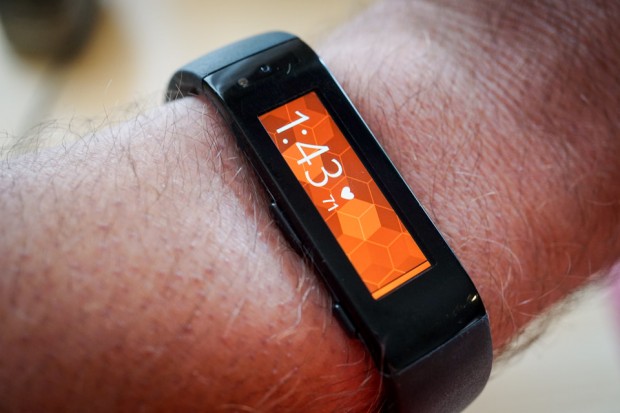 [FTC Disclaimer: Technabob was provided with the hardware tested in this review by Microsoft at no cost. However, all reviews on our website are the unbiased opinions of our authors, and in no way represent the views of the product manufacturers represented here.]