Dobot High Precision Desktop Robot Arm: There is no Trybot

Last year we featured the uArm, a desktop robot arm inspired by ABB industrial robots. It’s affordable and responsive, but it’s mostly a pick and place robot. The Dobot on the other hand appears to be precise enough for a variety of tasks. 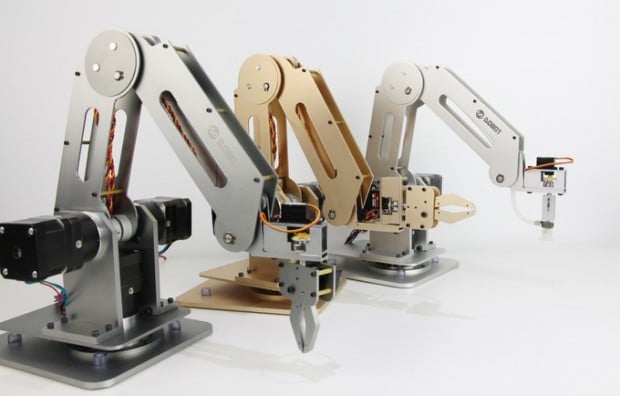 The Dobot is powered by an Arduino Mega 2560, has an aluminum alloy frame and has three stepper motors and a servo for 4-axis movement.

It’s precise enough to be used for laser engraving and drawing, and in fact comes with a 500mW laser head and a Chinese brush. It can also lift objects up to about 1.1lb.

Pledge at least $499 (USD) on Kickstarter to receive a Dobot as a reward. It actually started out as an Instructables project, so if you want to try and build it from scratch you should check out its original build log.

Here are videos of a few example applications, and you can head to the project’s official YouTube page for more: