You won’t see me swimming in the lake or the ocean. I’m not fond of putting my face where animals poop and might bite me. You certainly wouldn’t get me to go on a night dive near the Solomon Islands where you have to use bright lights to ward off crocodiles that might want to snack on your soft innards.

Researchers were doing just that when the ultraviolet light they were carrying spotted something very interesting. 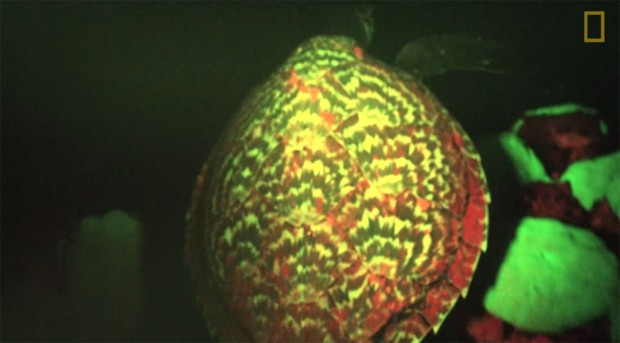 The team captured what it believes are first ever images of a glowing sea turtle. This endangered hawkbill turtle doesn’t have bio-luminescence, which is the ability of an animal to produce its own light. Rather the turtle is bio-fluorescent. That means it reflects UV light as a different color, such as red, green, and orange as you see in the video below.

Further research showed that other hawkbill turtles in the area have the same glowing properties. The scientists plan further investigation to see if hawkbills in other locations have the same biofluorescent properties.