Smartwatches may be the next big thing, but in Japan Epson appears to be making a killing off of its Smart Canvas, a line of limited edition wristwatches with E-ink screens and licensed pop culture themes. Its latest collection is based on Star Wars, though surprisingly not on the upcoming The Force Awakens. 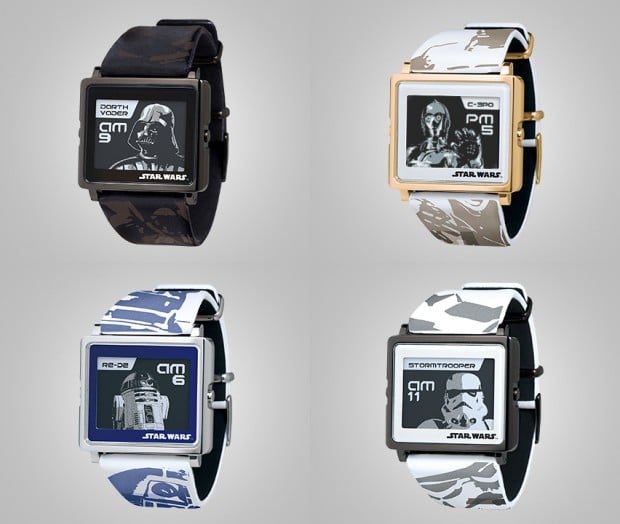 The watch comes in four variants, each with a different watch band and display graphics: Darth Vader, C-3PO, Stormtrooper and R2-D2.

They may not have apps or let you send your heartbeat as a message, but the watches do have different display modes. Story mode displays shots from the original trilogy along with the time:

Vehicle mode is pretty self-explanatory. The pair of Rebel watches will have the same graphics, and the same goes for the two Imperial watches.

And finally there’s the portrait-oriented Desktop mode, which also shows the room temperature. The funny thing about this mode is that the character shown on the watch changes based on the temperature, so you may never see some of them. Like Vehicle mode, the graphics shown in Desktop mode differ for the Rebel and Imperial watches.

Epson is selling each watch for ¥25,000 (~$203 USD), which sounds crazy for a relatively simple wristwatch, until you find out how much the Snoopy variant costs.