The Longest Bicycle in the World

Check out this ridiculously long bicycle. It was built by Mijil Van Mares Werkploeg, a cycling organization in the Netherlands. They built it specifically to get into the Guinness Book of World Records, and not because they like never being able to park their bike. Guess what? It is now officially the world’s longest bicycle, measuring in at a length of 117 feet and 5 inches long. 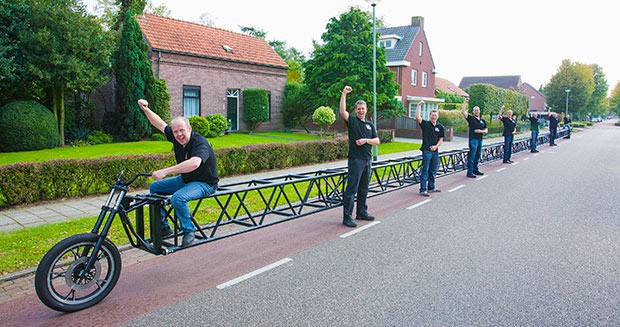 The team used the same kind of aluminum trusses that are used in concert lighting rigs. Riding this behemoth is no one man operation. A bike this long needs a co-pilot. That would be the guy who pedals from the rear. The guy in front steers. Turning around on this thing is a nightmare. You just can’t.

Team leader Frank Pelt says it rides just fine. That is until they come to a bend in the road.