A couple of months ago we checked out a free 3D template for a D20 die with Braille markers. If you’re interested in owning one but don’t have access to a 3D printer, check out 64oz Games’ Kickstarter fundraiser for a set of Braille polyhedral dice. 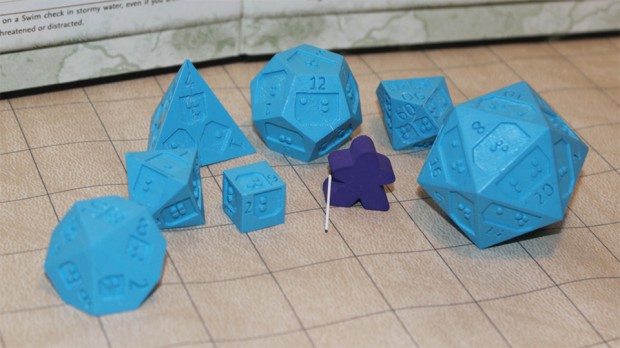 The set consists of Braille versions of the d4, d6, d8, d10, d12, d20 and percentile dice. Each die is made of 3D printed halves that are glued together. 64oz Games is raising money to buy the 3D printer it needs to print the dice.

Pledge at least $10 (USD) on Kickstarter to get one Braille polyhedral die of your choice, or at least $60 to get one of each die. I understand that 64oz games is a small company and I applaud it for taking on such a niche market, but I think it’s important to consider what it’s offering here. First of all, 64oz Games admits that these dice are not perfectly balanced. Second, I think including both Arabic numerals and Braille numerals on the dice is a compromise that makes it harder to read both. I think it would’ve been much better to have only Braille numerals on the dice. Third, all orders will be printed on just one 3D printer, and if something goes wrong with that machine then the dice might be delayed or worse.

That said, visually impaired people don’t have a lot of options, and to its credit, 64oz Games limited the quantity of its Kickstarter rewards so that it can deliver to backers in a reasonable amount of time. With its Kickstarter already exceeding its target amount, I hope 64oz can refine both its dice design and its production process.