Review: The 2016 Toyota Prius Is a Marvel of Modern Engineering

Toyota recently invited me out to southern California to take some time getting to know the new 2016 Prius. While the Prius is known for its exceptional fuel economy and eco-consciousness, it doesn’t exactly have a reputation for being a fun or dynamic car. Much of that has changed with the latest version. Toyota has listened to customers about the shortfalls of the prior generation car, and improved upon it dramatically with the new model. 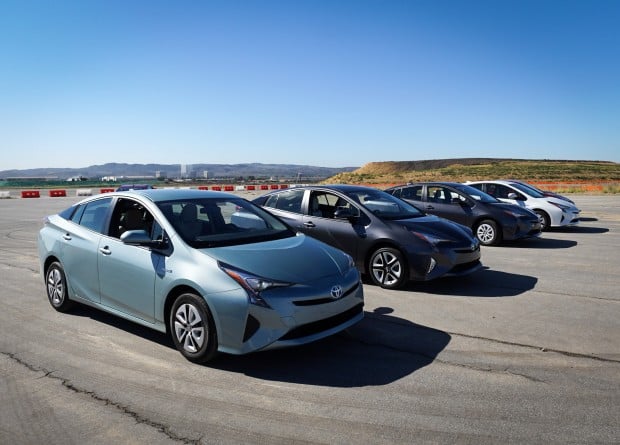 Not only is the new Prius much more fun to drive than its older siblings, it’s packed with technology to make it get even better fuel economy and increased safety. This is the result of countless hours of meticulous effort by Toyota’s design and engineering teams. 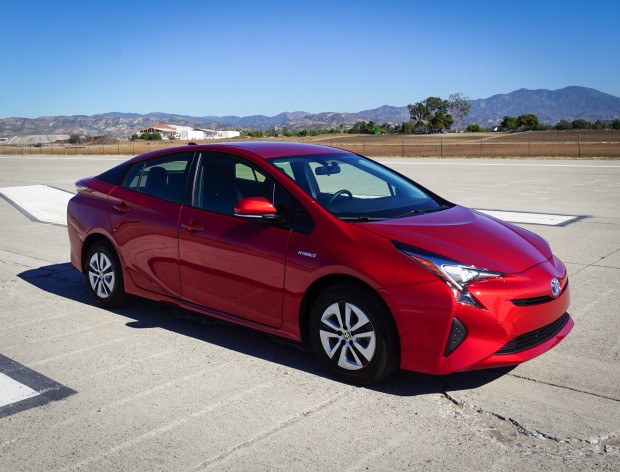 At first glance, the new Prius still isn’t what I’d call a beautiful looking car, but side by side with the prior model you can see some pretty substantial improvements. The new car’s styling seems much more dynamic than before, with a whole new look up front, and more dramatic body sculpting. It’s also 2.4″ longer, 0.6″ wider, and had its height lowered by 0.8″ – all of which help contribute to its sportier look than before. 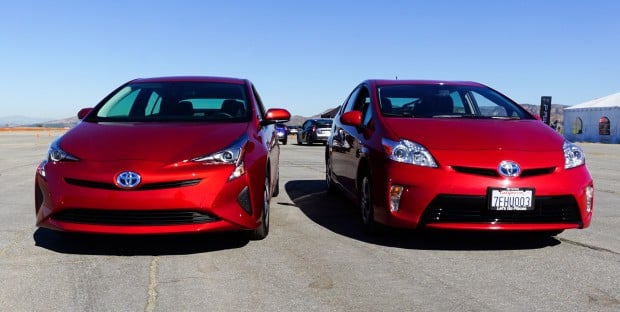 Prior Priuses (Pri-i?) have driven like what you’d expect from an eco-conscious car – a bit sluggish, with odd transitions between electric and gas modes, and numb handling. The new Prius is nothing like that. It drives like you’d expect a traditional gas engined compact car to do. Its updated hybrid drive engine smoothly transitions between electric and gas, and it’s quick off the line. In fact, while a guy in a BMW M5 stopped to admire the new Prius at a traffic light (yes, this really happened), I peeled rubber and took off faster than him – at least up to about 30 mph. 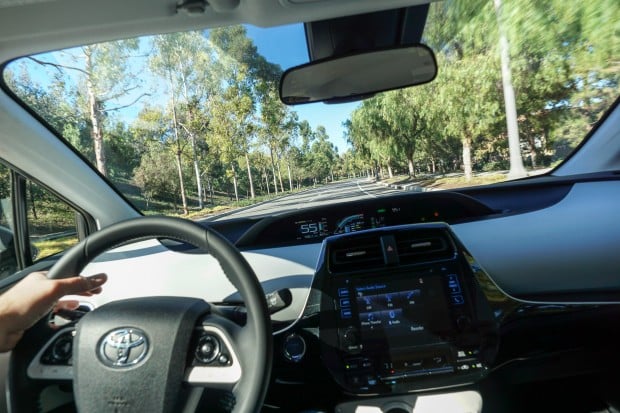 Yeah, the instant torque you get from the electric motor is quite speedy off the line, which makes it perfect for urban driving, where it’s nice to get a quick start from traffic lights. In addition to its low end performance improvements, the updated hybrid system takes up less space, is more thermally efficient, and weighs less, thanks in part to the Lithium-Ion batteries available in all but the Prius 2, the base model. 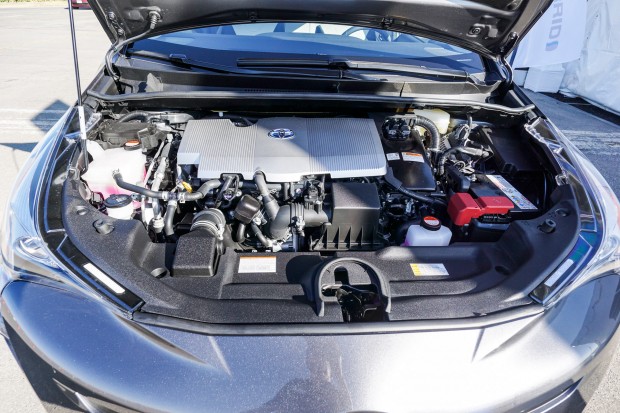 The new Prius also handles much better than its relatively uninspiring predecessor – thanks in large part to engineering improvements in its body structure. The car is the first to ride on the Toyota’s New Global Architecture (TNGA) platform, which offers dramatically better body rigidity than the outgoing model, through the use of techniques like laser screw welding, and high-strength adhesives. The result – a 60% improvement in torsional rigidity. Add to that a 1″ lower center of gravity, a new double-wishbone rear suspension, and the car is is just much more responsive than ever before.

The interior of the new Prius is almost even more of a surprise than its driving characteristics. While still carrying forward elements like its center-mounted instrument cluster, everything just feels more modern. I especially liked the futuristic, concept car-like white interior that’s available in some models, highlighted by the side-by-side, full-color 4.2″ dash displays. The interioris also quieter and more spacious than before. 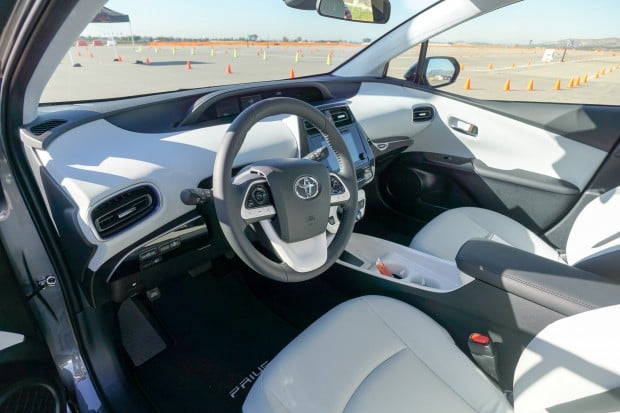 When fully loaded, the Prius offers enough high tech gadgets to satisfy any gear junkie. There’s a full color heads-up display, a 10-speaker JBL stereo with excellent audio quality, wireless Qi charging, and a plethora of driving safety and convenience features available too. If you go for the Toyota Safety Sense P package, you get pre-collision warning, with brake assist, automatic emergency braking, pedestrian detection, lane departure alert, automatic high beams, and dynamic cruise control with full-stop capability. Intelligent park assist can help you steer in and out of parallel or back-up parking spaces too. 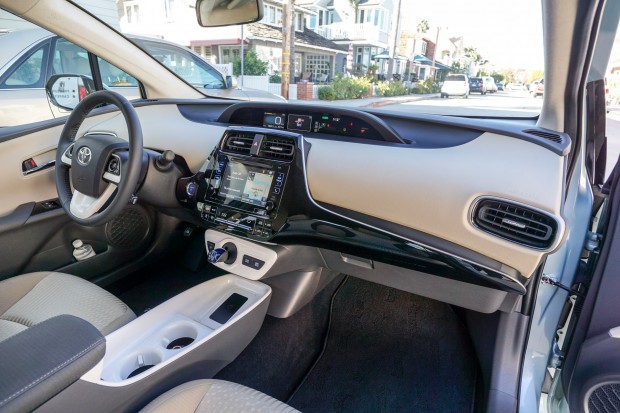 I even had a chance to test out the automatic emergency brake system (in a controlled environment), and it worked flawlessly to stop me from rear-ending another vehicle, as well as from running over a pedestrian from darting out into traffic. Naturally, both of these obstacles were proxies for the real thing, but it was still impressive, as I rolled up to them at 15 mph without my feet on the pedals. 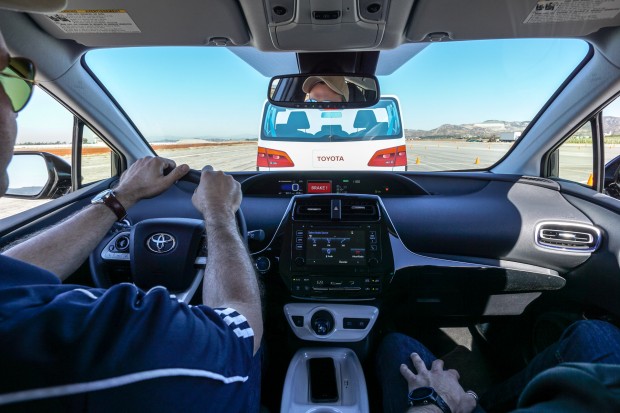 Of course, the primary reason anyone buys a Prius is its fuel efficiency and limited environmental footprint, and on top of all the aforementioned improvements, you’ll definitely get that too. For 2016, the Prius 2 manages an impressive 54 mpg city/50 mpg highway/52 mpg combined. Go for the Prius 2 Eco and you’ll get 58 mpg city/53 mpg highway/56 mpg combined, thanks to its Li-Ion battery, removed spare tire, and increased tire pressure. 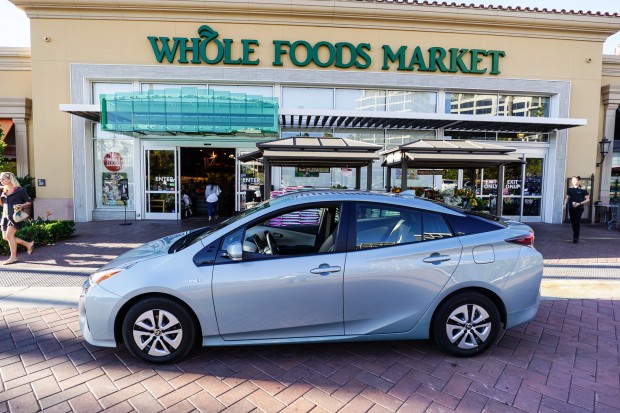 My opinion of the Prius has definitely changed now that I’ve had the opportunity to drive the new 2016 model. As a sports car and off-road enthusiast, it’s still not the first car I’d buy, but for anyone looking for outstanding mileage and high tech features, and still wants a fun ride, the new 2016 Prius is definitely worth a test drive.