Laptops and even desktop computers are getting touchscreens. But Redditor tokyopress’ computer has keyscreens. He made a Processing 2.0 program that turns his Corsair backlit keyboards into crude but cool displays. 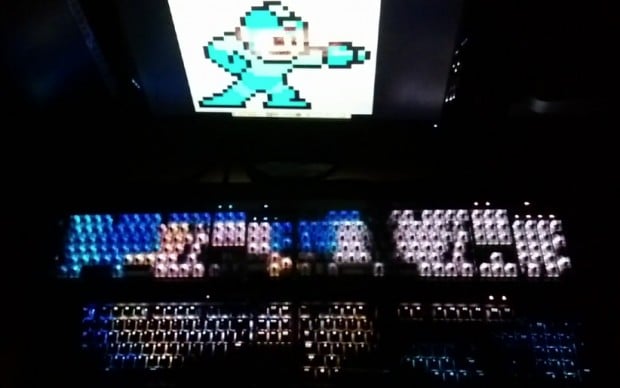 Tokyopress’ program takes advantage of GitHub user ccMSC’s unofficial OS X and Linux driver for Corsair’s K65, K70 and K95 keyboards. The program’s interface creates 2D replicas of the attached keyboards. You then load an image and move the virtual keyboard or keyboards to the part of the image that you want to replicate on the backlit keys. The program also lets you resize the virtual keyboards and even display videos or other visual effects.

Tokyopress used clear keycaps and key switches on a couple of his keyboards to enhance the effect, though he eventually went back to the K65’s original semi-opaque keys because because its LEDs were quite powerful.

This should be paired with a keyboard made of touchscreen monitors. Fellow Corsair collectors should check out his post on Reddit for links to the programs and parts that he used.