We’ve seen quadcopters and robots that can fly and walk (or roll), and one that can swim and walk. The Naviator drone on the other hand is equally adept at flying and swimming underwater. 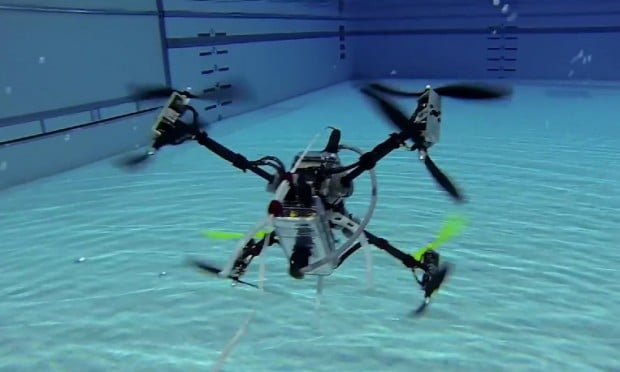 Prof. Javier Diez and several of his students at Rutgers University’s Department of Mechanical and Aerospace Engineering have been working on the Naviator for years, but it took off earlier this year when they received $618,000 (USD) from the United States’ Office of Naval Research (ONR), who were apparently extremely impressed by the prototype.

The ONR hopes to someday use such a drone to look for underwater mines and enemies as well as inspect underwater structures such as those in piers, bridges and oil platforms. If they can make it drop or retrieve a substantial payload then all bets are off.

[via Rutgers University via Mikeshouts]