Everything I know about surfing, I learned watching Blue Crush because Kate Bosworth. That is to say, I don’t know anything about surfing other than you stand on the board, and if someone gets on your wave you have to kick their ass. I learned that last part from Point Break. 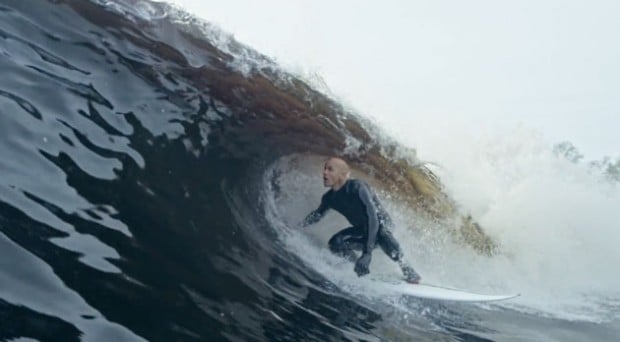 To keep his surf going all day long, pro Surfer Kelly Slater and his team have created the ultimate artificial wave machine. This amazing contraption creates uniform waves with barrels that surfers can ride in and waves that allow progression for tricks that need air. Check out this amazing machine in action in the video clip below.

The wave machine prototype is in use right now at a secret location. I’m not sure why all the secrecy, I wouldn’t think industrial espionage in the wave industry would be a big deal. He’s probably more concerned about random surfers stopping by and trying to use it.

Kelly’s wave maker could usher in a new era for surfing as a sport since uniform waves would potentially allow surfing in the Olympics, regardless of location.