Craig Warrack makes custom action figures, particularly those based on Marvel characters. This year he joined The Fwoosh’s Secret Santa for toy modders. This is his present for his mystery giftee: a sixth scale Apocalypse figure. 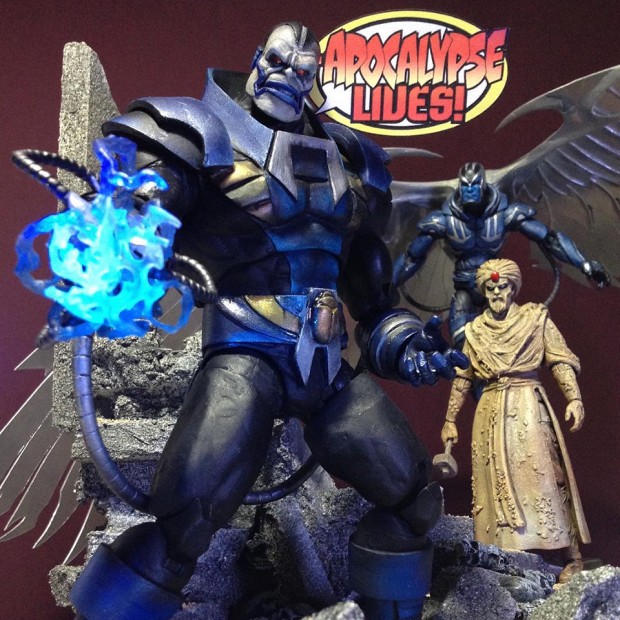 Craig made Apocalypse using parts from a Hulk action figure as well as Thanos, Iron Monger and Green Goblin from Hasbro’s Marvel Legends Build-a-Figure line. He also sculpted some of the figure’s parts, such as the head and the collar. As if that wasn’t enough, Craig also made a figure of Apocalypse’s enemy-turned-slave Ozymandias by sculpting details over a Black Series Obi Wan Kenobi.

Craig’s giftee listed Apocalypse as one of their desired figures, preferably based on the mutant’s appearance in the awesome arcade game X-Men vs. Street Fighter, where Apocalypse is the final boss.

Craig ended up going with a different style, but as a concession he made interchangeable hand attachments based on some of Apocalypse’s weapons in the game, such as a drill and a spiked ball.

The video playlist below shows Craig’s build log. You can start at the third video if you just want to see him make the figures (he reads his giftee’s wish list in the first video, and shares his research on the character in the second video).

I’m sure the lucky giftee loved his present, but I’m actually more into the Ozymandias figure. Check out Craig’s YouTube and Instagram pages for more of his work.