Last October, gadget reviewer and PC enthusiast LinusTechTips made a single PC that was powerful enough to run two high-end virtual gaming machines at the same time. Unsatisfied – or perhaps too satisfied – with the result, he then decided to put together a gaming rig that can handle seven high-end virtual machines simultaneously. 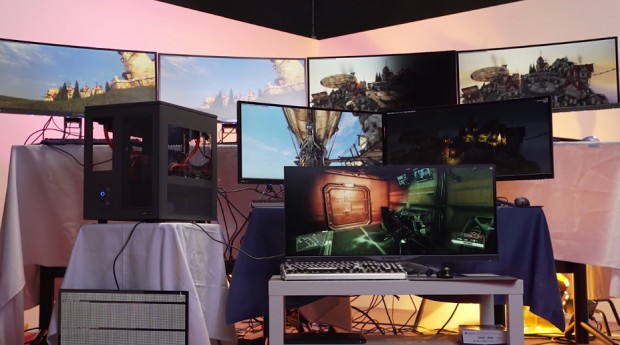 You can find the resulting computer’s full specs on LinusTechTips’ forums, but its main components are a pair of 8-core 3Ghz Intel Xeon CPUs, seven (!) AMD R9 Nano GPUs, 8 1TB SSDs and 256GB of RAM. Linus also used a custom cooling solution for the GPUs. The total cost? About $30,000 (USD), though in Linus’ case he got most of the parts for free.

As with the 2-in-1 build, Linus used a server operating system called unRAID to create and run the seven virtual gaming machines. Check Linus’ video for the 2-in-1 machine for the complex software setup process. You can skip to 9:40 in the video below to see the seven-headed monster awaken.

And here I am with a laptop that barely runs Hearthstone.