If there were ever a reason to put Forrest Gump on the ISS, this would be it. NASA sent up a pair of special paddles to the space station that allow astronauts to play ping-pong with water globes. The paddles were laser etched and then coated with Teflon, making them super-hydrophobic. 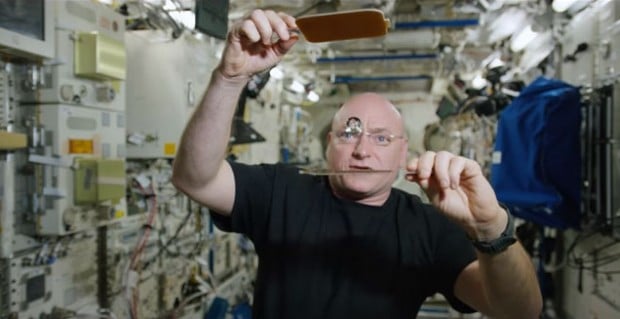 The combination creates a surface that water can’t adhere to. The result is that you can smack floating orbs of water between the paddles. NASA says the larger the drop, the less force it takes to smash the floating glob of water, the smaller the drops the harder you can hit them so you need some finesse. Astronaut Scott Kelly demonstrates the phenomenon in the video below:

I’d assume the Russian contingent on the space station has vodka. The U.S. team has the paddles. This could be the best drinking game in history.  Rules of Vodka Pong are each astronaut gets a chance to smash the vodka into the mouth of the competition, if it hits their mouth, they have to swallow. The first one to puke loses and has to clean up the floating mess. You’re welcome, astronauts.