Fans of Star Trek: The Next Generation and later Trek productions know that computer graphics were used extensively, meaning there generally aren’t models of the Enterprise from Picard’s reign on. In the original series, the Enterprise was an 11-foot long model that had lights inside. The screen-used model that was featured in the filming of every one of the 79 episodes of the original series is now undergoing refit. 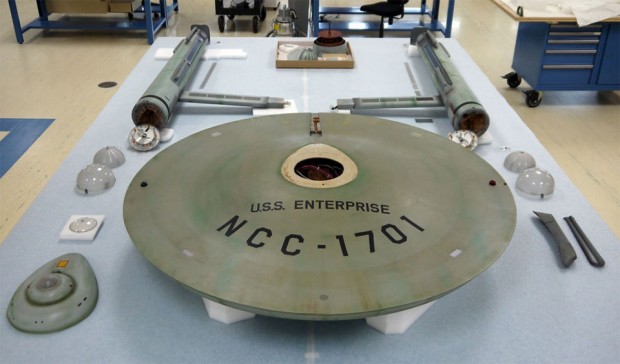 That refit is underway at the Smithsonian’s National Air and Space Museum in the nation’s capitol. Preservation work on the model is ongoing, and the starship it is being restored to look like the Enterprise as it was seen in The Trouble with Tribbles episode of the show.

That episode had the last known modification to the model. The paint is being redone to match the grey color found under the saucer bolt cover and from images fans have taken of the model over the years. Under X-rays, conservationists found that the secondary hull was held together using only old adhesive with no other support. Internal supports will be added to stabilize the hull to help the ship last even longer. Once finished, the Enterprise will go on display in time for the 40th birthday of the National Air and Space Museum, and the 50th anniversary of the original Star Trek series.