Smash Bros. Played on a Twitch-controlled Bucking Couch is Glorious

Whoever the deviant, glorious bastard was who came up with the latest Twitch masterpiece is a damned genius. It sounds like your typical boring Twitch stream on the surface – a contest where people sit on a couch and play Super Smash Bros. Meh. 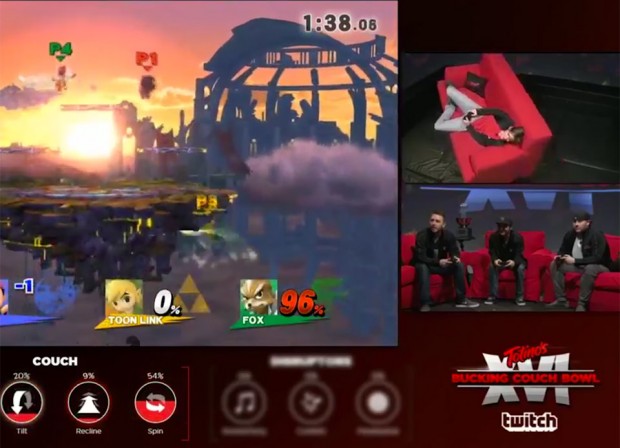 Then I come to find out the couch is actually attached to a mechanical bull apparatus controlled by Twitch viewers out to kill and maim. Now you have my attention. Then you show me the .gif below. Look at this poor SOB, playing his game on the couch. At first he is all “Whatever. I got dis.” Then he starts to get flung around and when his cheek hits the back of the couch he knows he is screwed.

Then he flies heels over ass into the wall and that is exactly when I knew I had watched the greatest Twitch stream ever. By god, I think we need this sort of apparatus under the editor here at Technabob as he tries to whittle down the f-bombs and penis references I put in my stories mostly just to screw with him. NOPE KIM-JONG PAUL, NO EDITING TODAY! Wham into a wall with you. Let’s start a Gofundme and make it happen! HUZZAH!