The damned Duck Hunt dog is hounding us into the 21st century, thanks to Computer Science student Joseph Delgado. Joseph spent an entire day making a virtual reality version of the classic NES shooter. 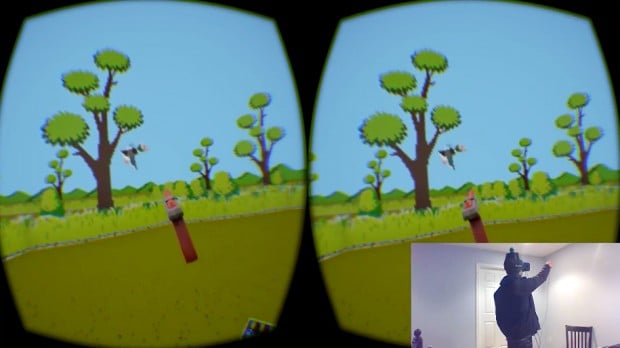 Joseph made the game for the recently concluded Global Game Jam 2016. The event’s theme was “ritual”, so Joseph added a few sim elements to Duck Hunt. The game is divided into seven days, with each day being more difficult than the last. Every morning the player wakes up in his hut, which has a few items that he can shoot for practice, as well as the clay shooting mini-game. Joseph used the Razer Hydra controllers and an Oculus Rift DK2 to play his game.

The silly thing on his head is the Hydra’s base station. He says the controllers found it difficult to maintain a stable connection with the base station when the latter was on his desk, so he attached it to his head using a custom made 3D printed hat. The lengths people go to to play Duck Hunt.

You should’ve stayed in 2D you mutt. Someday we’ll be advanced enough to whoop your butt. Head to Joseph’s blog for more on his port.