We’ve seen a four-armed robot drummer that’s good enough for a casual gig, but only because the drum patterns are programmed into it. Researchers at the Georgia Institute of Technology came up with a compromise by augmenting a human drummer with a third robot arm. 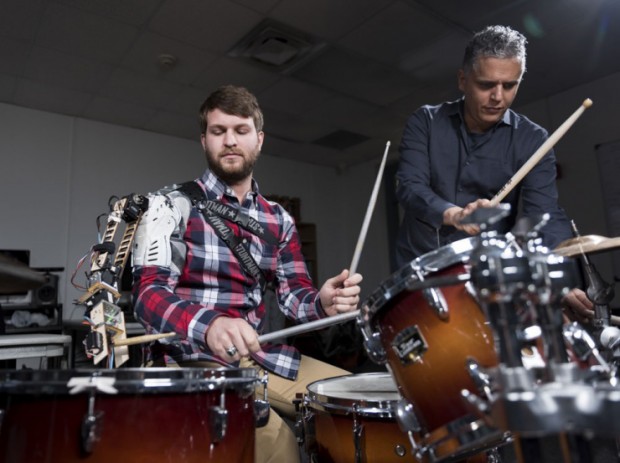 Led by Professor Gil Weinberg, the team was inspired to make the wearable robotic limb after they successfully made a robotic prosthetic for a drummer who recently lost an arm in an accident. The prosthetic – which can hold two drumsticks – allowed the disabled drummer not only to continue drumming but to augment his skills in ways that are not humanly possible. 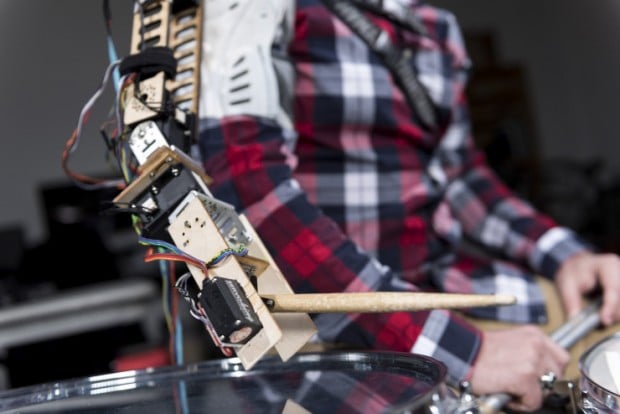 This wearable robot uses sensors to detect its position relative to the drum set and the drummer’s arms. Instead of being programmed with drum patterns or a set of movements, the robot improvises using a couple of rules. It moves to a drum or a cymbal that complements the ones that the human drummer is about to hit. It also adapts to the drummer’s beat and rhythm. But as you’ll see in the video below, as it stands the robot can’t keep up with his fleshy counterparts.

Professor Weinberg and his team believe that there’s value in improving the robot. For instance, they’re looking into using an EEG headband to detect the drummer’s brain patterns. The idea is to make the arm more responsive by allowing it to act based on the drummer’s thoughts instead of his movements. Further, the arm can be customized for other professions or activities, such as surgery. Or good ol’ robot arm street fighting.

[via Georgia Institute of Technology via CNET]