Reki Kawahara’s popular light novel and anime series Sword Art Online is about a group of gamers who become trapped in a virtual reality fantasy MMORPG. The gamers wore headsets that connected to their brain, stimulating all of their senses to create an extremely realistic experience. How realistic? When they die in the game world, they die in real life. And now Reki and publischer ASCII are collaborating with IBM Japan to make a real version of the game, which they’re calling Sword Art Online: The Beginning. Uhm, yay? 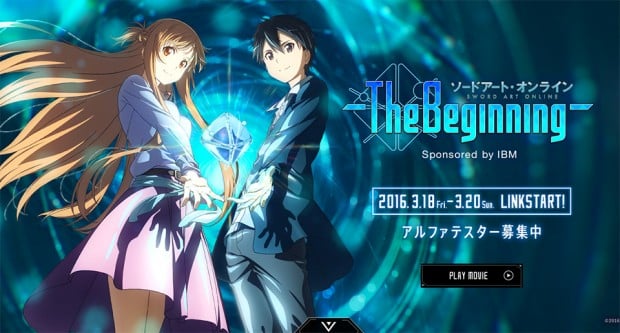 Seriously though this is a fascinating development. Since we don’t have a sophisticated computer-to-brain interface at the moment, the IBM’s take on Sword Art Online will be played with motion controls, i.e. players will move in game by actually moving their body. Gematsu says that IBM Japan will make the virtual reality game with the help of its cloud computing subsidy SoftLayer as well as its progress in cognitive computing. The latter involves using natural language processing and machine learning to quickly sort through massive amounts of data to understand a task delivered in plain language (e.g. English) and come up with the requested information. This is what IBM’s Watson did when it won a game of Jeopardy! back in 2011, though it’s unclear how it will be used in SAO: The Beginning.

IBM Japan is currently looking for 208 Japanese residents to conduct the VR MMORPG’s alpha test, which will be held on March 18 to 20 in Tokyo. I hope Reki appears in-game and mock hostages the testers.