Boston Dynamics has released a video demonstrating a new upgraded version of its upright walking ATLAS robot. It’s still scary as hell and marches us one step closer to a robot controlled Earth. Watch as it leaves the robot facility all on it’s own and opens the door to go outside – without human permission. Then it goes for a stroll in the woods, reminding me to dig a hole somewhere and go hide. 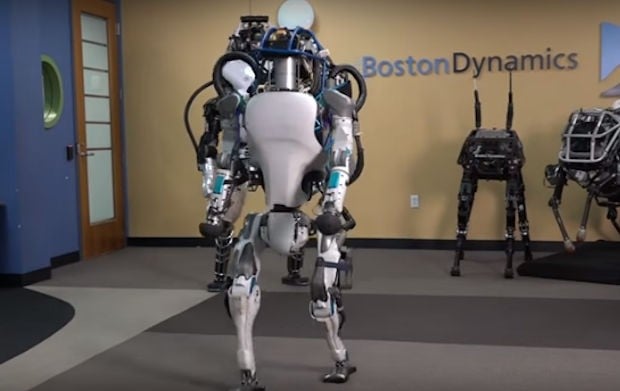 After that, ATLAS shows how it can lift boxes and put them on shelves. It shows off more skills, but I can’t watch. No wonder gun sales are going up. I just wanted one nice robot to wash my dishes and do housework. Now they are all over the place, just waiting to take us over.

This new model is shorter and quite a bit lighter than the previous version, plus it’s capable of standing itself up after being knocked over. I sure hope it has some weakness we can exploit, otherwise we’ll be in serious trouble.