Redditor Sithslayer78 loves playing Humans vs. Zombies (HvZ), a live action game where players try to survive a zombie invasion using soft toys, such as NERF blasters. He’s added another layer of roleplaying to his HvZ games by modding his blasters in the style of Halo‘s trusty assault rifle. 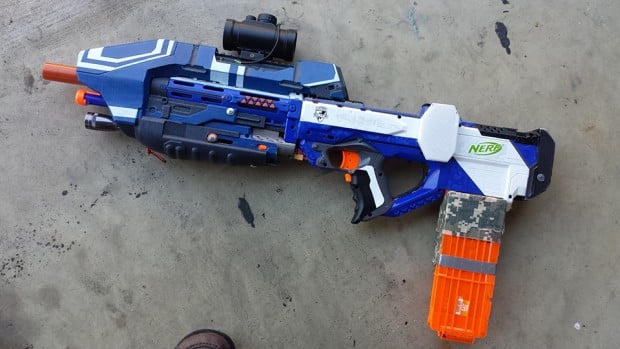 This Rayven is the 5th NERF blaster that Sithslayer78 has modded in a Halo theme. He designed, 3D printed and painted the front end parts to make the blaster look like the MA5D. It isn’t that polished aesthetically, but it makes up for it with several practical features. For instance, the blaster has an ammo counter similar to the one on the MA5D.

Sithslayer78 used an Arduino Uno to detect trigger pulls, reed switches in the magazine to determine the current ammo count and an Adafruit OLED display with a NeoPixel RGB LED to indicate the remaining ammo.

The display also shows if the magazine is not fully closed and also has a timer feature:

The customized blaster also has a scope, a flashlight and a NERF Jolt modded into a Masterkey.

Sithslayer78 says he’s thinking of printing more of the MA5D front end parts so he can sell them. Keep an eye on his Facebook page if you’re interested.