Microsoft is now taking applications from software developers for the HoloLens Developer Edition, the beta version of its augmented reality computer. Yes, computer. The HoloLens doesn’t need to be connected to a PC to work because it is itself a Windows 10 computer. It’s powered by a 32-bit Intel CPU and Microsoft’s internally developed Holographic Processing Unit (HPU). It also has 64GB of memory, 2GB RAM and a battery that lasts up to 3h per charge.

The HoloLens will come with a remote control called the Clicker, which will let you select, scroll, hold and double-click. HoloLens also supports input via gesture, gaze – i.e. eye tracking – and voice. It also has a battery of cameras, a light sensor and an inertial measurement unit (IMU). 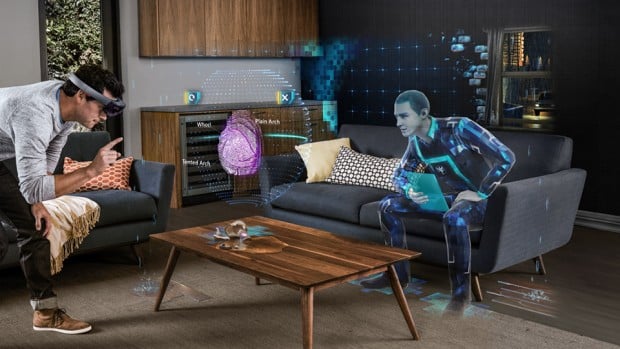 Microsoft has prepared a handful of launch applications, which will all be available from the Windows Store. The company made a shooter called Robo Raid, while Asobo Studio made a detective game called Fragments and brought back an emaciated Conker in the platformer Young Conker.

The other launch applications include an augmented reality version of Skype, which lets the other caller see the wearer’s point of view as well, and HoloStudio, a simple CAD application.

There are two other launch apps, but they don’t have preview videos as of this writing. HoloTour sounds like a Street View-like experience, immersing the wearer in 360º views of famous locations such as Macchu Picchu or Rome. The last one, Actiongram, sounds like a video editing app that lets you simultaneously record live action and holographic images: “Actiongram uses mixed reality capture (MRC) to blend holographic content into real world settings, allowing anybody to create emotionally compelling and humorous videos. These are videos that previously could only be created using expensive effects packages by people with extensive 3D training. Now, anybody can create their own mixed reality videos!!”

If you’re not impressed by any of these – judging from the YouTube comments on the videos above, practically no one was blown away – remind yourself that they exist not for entertainment or professional use but to give developers concrete ideas of HoloLens’ capabilities. The final version of HoloLens and its apps are years away from being released.

Besides, beyond being a software developer you’ll need to pay $3,000 (USD) to own the HoloLens Developer Edition. If that doesn’t scream “This is not for end users, you judgmental YouTube commenters!” then nothing will.