Last month we checked out a decorative tape with a circuit board design. It turns out that researchers at MIT Media Lab’s Responsive Environments group have considered such a form factor for interconnected and programmable sensors, and are looking for potential customers for their product. 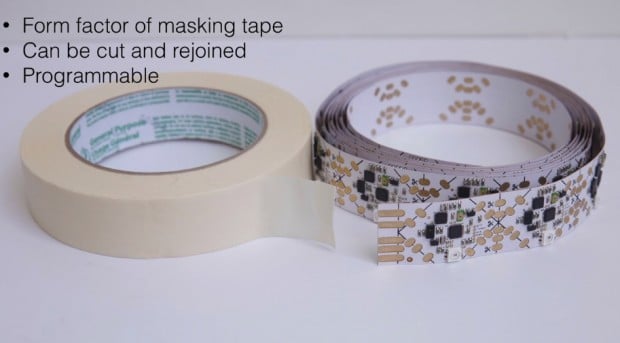 Artem Dementyev, Hsin-Liu (Cindy) Kao and Joseph Paradiso’s Sensortape consists of sensors that communicate with each other to detect their position in 3D. They also have light and proximity sensors and built-in LEDs. The beauty of Sensortape is that it’s almost as easy to install as a regular roll of adhesive tape. You can cut it into smaller pieces (the tape has black lines to indicate where you should cut them) to form short segments or make two-dimensional shapes with the help of conductive tape or solder.

As stated in the video, Sensortape’s projected retail price is a bit expensive at around $200 per 3.3ft. of tape. Speaking with Fast Co. Design, Artem says he’d rather focus on increasing the electronics’ capabilities instead of coming up with a more affordable product. In fact he’s looking into a variant that will come in sheets for large scale projects. You can read the researchers’ full paper on MIT’s website (pdf) and register your interest in Sensortape on Artem’s website.