Virtual Partner for Keep Talking and Nobody Explodes: Still Alive

Steel Crate Games’ bomb defusal party game Keep Talking and Nobody Explodes (KTANE) was one of the first popular killer apps for virtual reality headsets. Now available via Steam and the Humble Store, the game no longer requires a VR headset to play, but it still requires at least two players. Until now. Programmer Devan Hurst made Charlie, a voice-activated software assistant that lets you enjoy the game on your own. 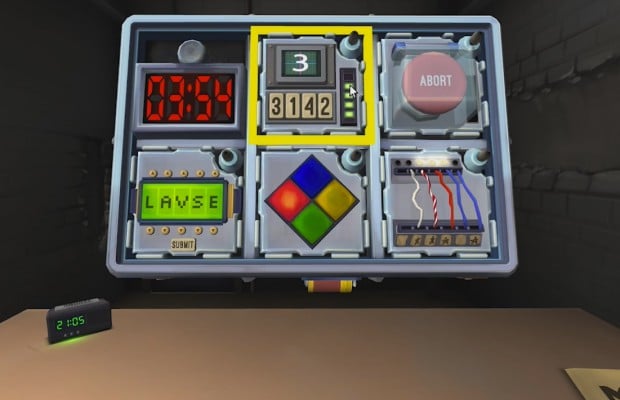 In case you’re not familiar with KTANE, it lets you pretend to be a team of bomb defusal experts. The catch is that only one player can look and interact with the bomb, which has randomly generated puzzles that need to be solved for it to be defused. The other player or players will read through the bomb defusal manual and look for the right ways to interact with the bomb’s puzzles, such as cutting wires or entering keycodes. Charlie plays the latter role. Devan programmed it to recognize key phrases that identify the different types of puzzles. Charlie answers back via text-to-speech, so you really are still talking with your partner. Here’s an exciting demo of Charlie and Devan teaming up:

Regarding the hilarious bit at the end, Devan says that he did program key phrases that will trigger an appropriate response from Charlie if they win or lose the game, but “Oh my god” wasn’t one of them. It seems Charlie is a tad paranoid.