Today’s wearable devices often mimic the forms of analog devices such as sunglasses and watches. But that won’t be the case forever, in the same way that today’s smartphones look very different from their predecessors. Researchers at the University of Tokyo’s Someya Group give us a glimpse at the future of wearables with a series of electronics that are thin and flexible enough to be laminated onto skin. 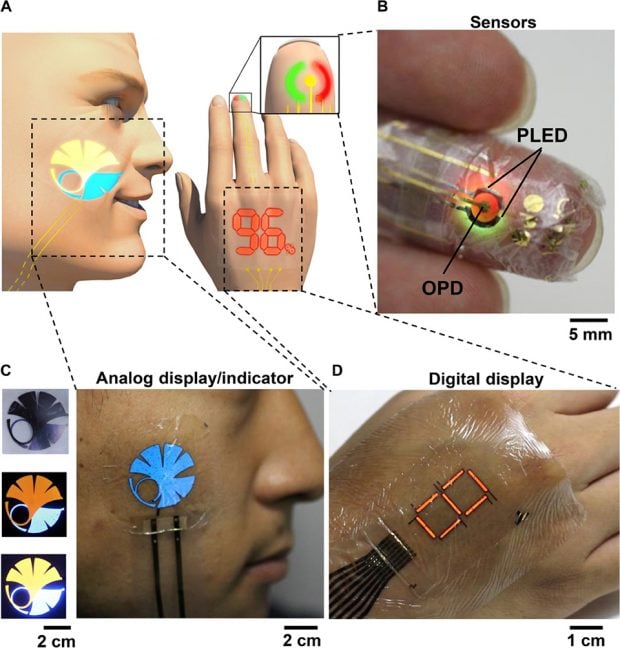 The image above shows three of the Someya Group’s proof-of-concept electronic skin or e-skin devices. Figure B shows a device that measures the oxygen concentration of the wearer’s blood, while figures C and D show displays. The video below shows the digital display e-skin in action, as well as proof that the e-skin withstands deformation, such as when it’s crumpled.

While the Someya Group’s e-skins are not the first of their kind, previous attempts resulted in e-skins that were several millimeters thick, while these new ones are as thin as 3 micrometers. They’re also significantly more durable than their predecessors, lasting up to a few days compared to only a few hours with previous e-skin devices. The researchers achieved this durability by using protective layers made of silicon oxynitride and a polymer called Parylene. Older e-skins had glass or plastic substrates, which did not do a good job of protecting the electronics from water vapor and oxygen in the air. You can read the researchers’ paper on Science Mag. How hilarious would it be if battery technology never catches up with the rest of wearable technology?