DIY Synesthesia Mask Releases Scents Based on Color: I Smell Trees of Green

Synesthesia is a rare condition wherein a sensory input consistently activates multiple senses or emotions. Some synesthetes see colors when they see a particular letter or number. Others have their sense of taste activated when they hear a word. Zachary Howard’s Synesthesia Mask on the other hand approximates the condition of synesthetes who can smell colors. 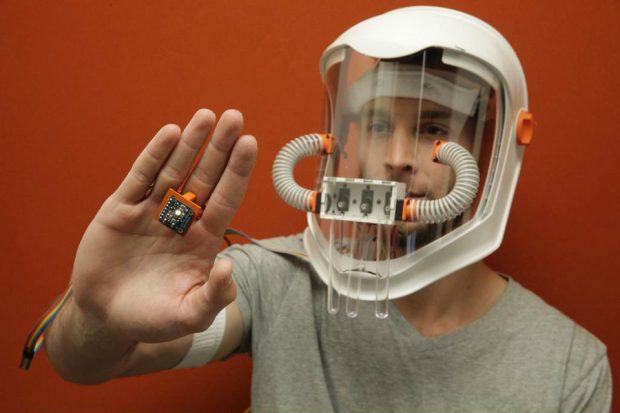 The mask’s electronics are controlled by an Intel Edison. A color sensor meant to be worn on the hand sends RGB values to the Edison. The mask also has three tubes filled with fragrance oils, one each for red, green and blue. In Zachary’s case, the red tube has a grapefruit scent, the green tube has a tea tree scent and the blue tube has a lavender-scented oil. Each tube has a servo that can open its cover in varying degrees, and there are fans that send the resulting mix of oils into the mask.

Zachary then wrote an Arduino program that instructs the servos to open the tubes’ covers depending on the RGB values sent by the color sensor. So if the object he’s inspecting is predominantly red, he’s going to smell mostly the grapefruit scent.

Zachary must hate white objects now. Head to his Instructables page to find out how he put the mask together.