One look at the image below and you should know that when I say hoverboard distance world record, I don’t mean those dumb “hoverboards” with two wheels that will burn your house down. I am talking about a real flying hoverboard that will get you into the air. 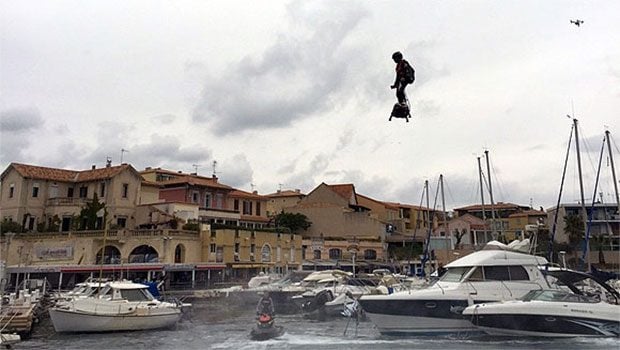 This amazing flying contraption called the Flyboard Air was designed by Zapata Racing and piloted by Franky Zapata, and recently made the rounds on the internet with many questioning its authenticity.

Firmly disproving his cynics, Zapata stepped onto the Flyboard Air and proceeded to fly the device for 7,388 feet, destroying the previous Guinness World Record of a mere 905-feet, 2-inches set last year. During the flight, Zapata was about 164 feet in the air. He was followed by a jet ski and a boat since he flew over water. The record was set in Sausset-les-Pins in southern France. No video of the Guinness World Record flight has surfaced as of yet, but the test flight video shows the Flyboard Air in action.

Zapata claims his flying machine can reach 10,000 feet, a 93 mph top speed, and 10 minutes flight time. I’d so ride one of these to work every day, if I knew it wasn’t going to randomly toss me to the ground.