Holy Mackerel. This guy wanted to up the game of his boxy old Volvo, so naturally he covered it in animatronic singing and dancing lobsters and Big Mouth Billy Bass fish – as any of us would have done. Now it is a moving musical starring fish and lobster. It puts on a heck of a show. 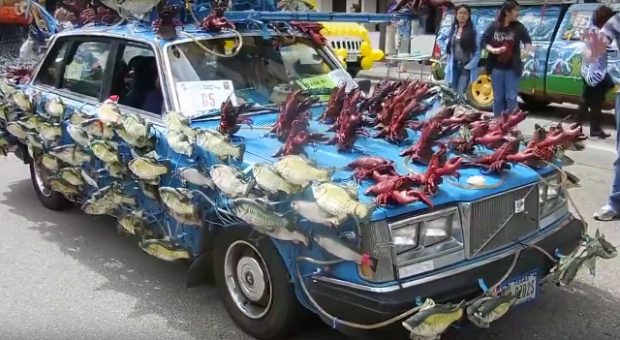 The car is officially known as the “Sashimi Tabernacle Choir.” It isn’t new, but I bet you haven’t seen it before. Well, now you can’t unsee this lobstrosity. You’re welcome.

What i would like to see is a semi-truck that looks like a giant shark, speed up behind it and eat this thing. This could be the beginning of a weird new Mad-Max like phenomenon, where fish-laden cars and trucks neglect the sea and battle for our roads.