RFID tags are most often used for tracking or identification. But scientists from Disney Research, University of Washington and Carnegie Mellon University have figured out a way to use them to create buttons, knobs and other input devices out of paper. Just like RFID tags, these input devices are small, light and powered wirelessly by RFID readers. 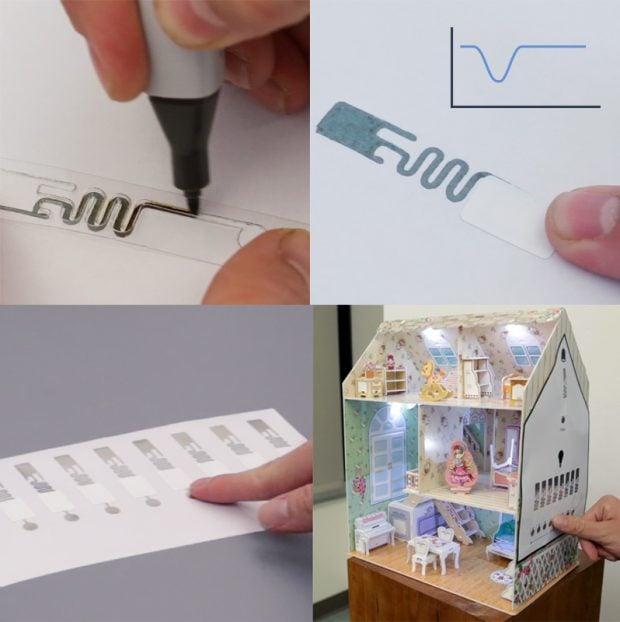 The scientists’ PaperID system is based on a commercially available stick-on RFID circuit that’s paired with an ungrounded monopole antenna. The antenna was intentionally designed to be bad at harvesting signals – and thus energy – from RF readers. But when the antennas are touched, the human body acts as a ground plane, allowing them to draw enough power to be detected by RF readers. In short, they’re like other HIDs such as a mouse or keyboard. They won’t send any feedback unless we interact with them. By measuring and interpreting the changes in the antenna’s signal when we interact with them, the scientists were able to make buttons, knobs, sliders as well as gesture- or motion-sensing devices out of paper. Equally important is the antenna’s simple design, which makes it easy to print or draw using conductive ink.

It’s like Makey Makey but with paper. Head to Disney Research’s website to read the scientist’s paper on PaperID. You should also check out Disney Research project called RapID, which has a similar purpose as PaperID but with a focus on low latency input, similar to video game and music controllers.