One of the dream – or nightmare – scenarios involving robots are ones that would automatically replicate or create other bots. One of the biggest hurdles for such a system is putting a robots’ parts together. But researchers at MIT’s Computer Science and Artificial Intelligence Laboratory (CSAIL) figured out a way to create fully functioning robot bodies or parts with no assembly required. 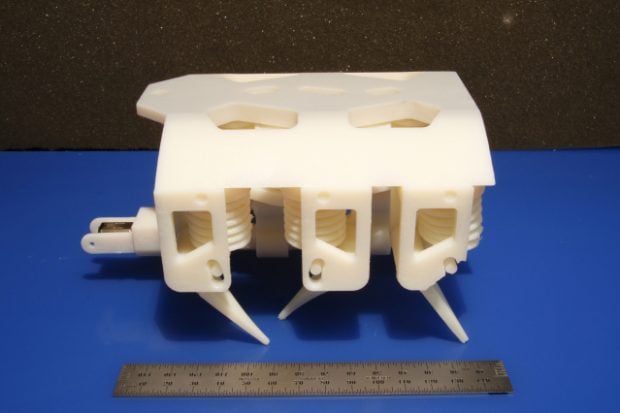 Instead of making robots with separate moving parts that need to be put together, the researchers focused on making hydraulic robots. To do this, they had to come up with a way of printing both solid and liquid materials in one go. They went with an inkjet 3D printer, which allowed them to use up to eight different materials at the same time. They also had to figure out the proper orientations and print resolutions to make sure that the liquid materials won’t interfere with the solid parts while they’re being printed. The result is a highly customizable system of printing robots – such as the one in the image above – that need only a motor and a power supply to function. The method also allows for printing parts such as a soft gripper or a gear pump encased in a housing.

We already know that it’s possible to integrate electronic parts within a 3D printed object. Imagine if we can figure out how to print batteries or some form of power supply along with the robot’s body. That’s some weird science right there.

[via MIT via Ubergizmo]