When I was a kid, one of my favorite activities was to play with slot cars. These scale car sets can be a whole lot of fun, though it’s no fun when your car jumps out of the slots. Sure, there are slotless car sets too, but gameplay is pretty limiting with classic slot cars, and the tracks can get very expensive. The Anki Overdrive is a modern take on slot cars, doing away not only with the slots, but also the wires. 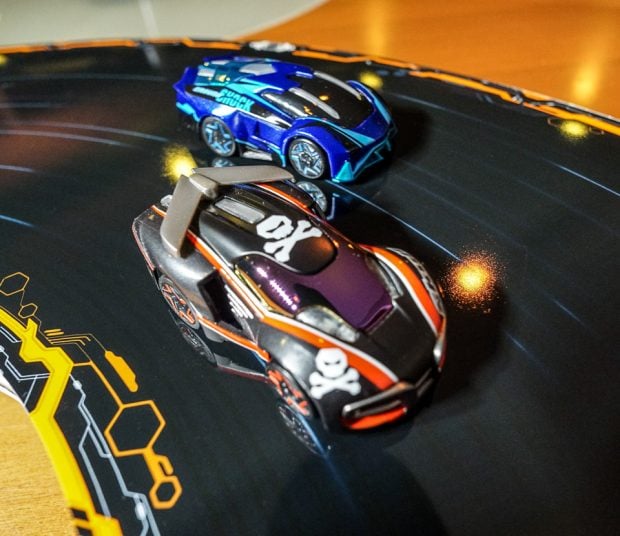 What makes the Overdrive race track different from conventional slot cars is that the cars are controlled by your smartphone rather than wired controls. 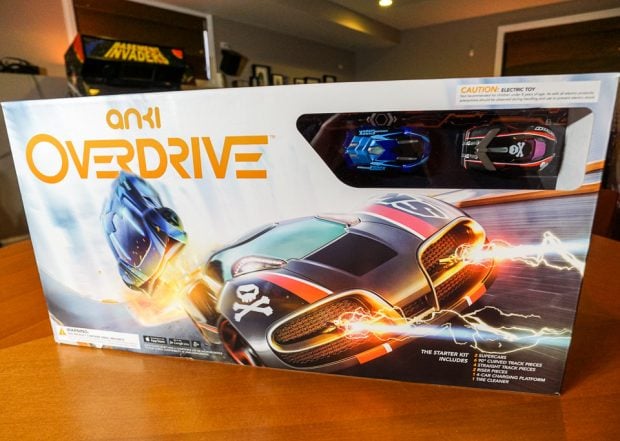 The Anki Overdrive Starter Kit includes everything you need to start playing in minutes. Inside the box, you’ll find two scale race cars, a charging bay with an AC adapter, 10 track sections, and two riser beams – enough to create eight different courses. There’s also a sticky pad to help keep the tires on your cars clean and free of dust and debris. 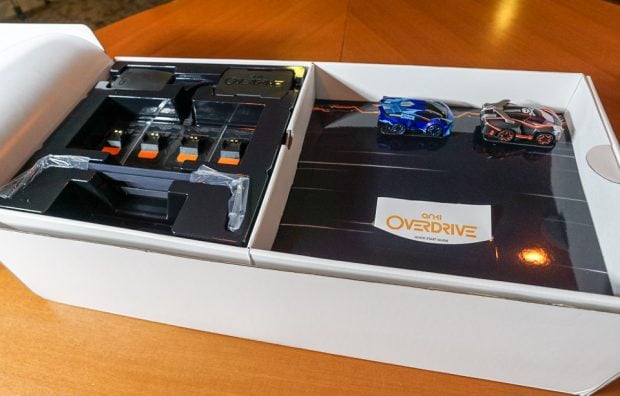 Setup is super simple. Just unwrap the shiny track sections, and snap them together on a flat surface. There are no wires to run, and the track sections click assuredly into place using magnets. Just be sure to include the special “Start/Finish” section in every track you build. 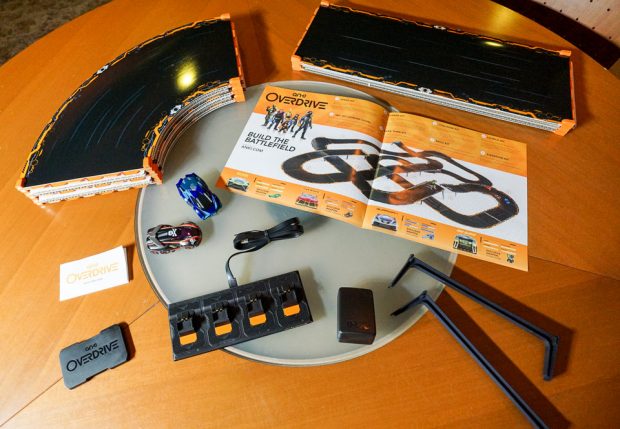 Track sections are wide enough to have four cars on track at the same time, which I’m betting would be great fun. I only got to play with two cars so far. 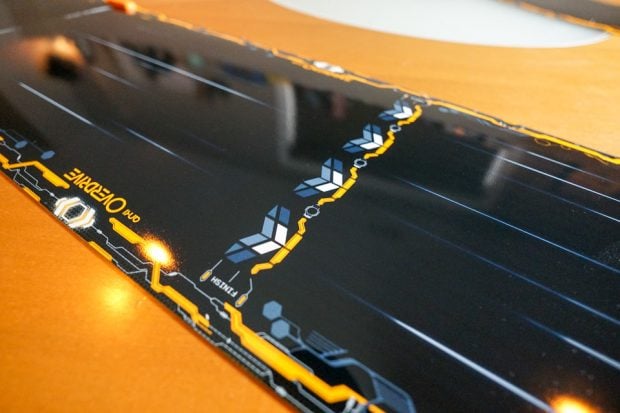 While you set up the track, you can charge the cars up. An 8 minute charge should give you enough juice for 20 minutes of racing. Of course, like all cars, your mileage may vary depending on your driving style. If you keep the pedal mashed down the whole time, you can expect less battery life. 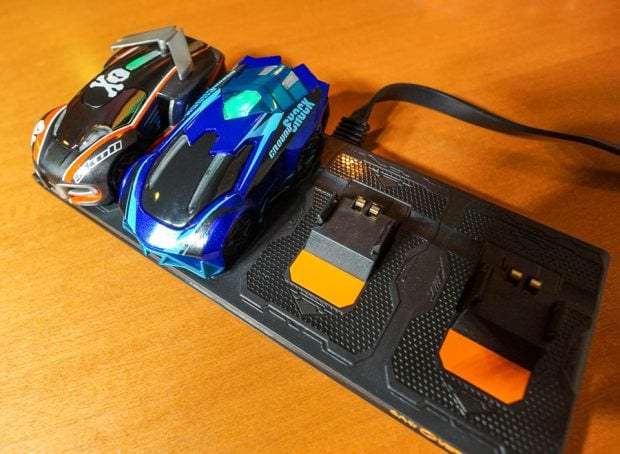 You’ll also need to install the Anki Overdrive app on your smartphone before you start racing. This app not only acts as a controller for your car, but provides a video game like racing experience, in which you can go up against computer opponents or other players, and level up your cars as you win races. 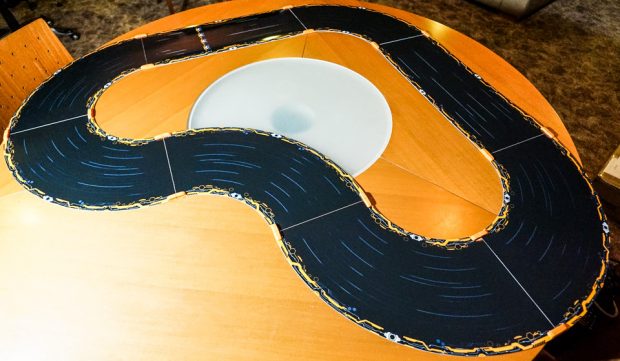 Once you design your track, the cars will automatically scan the design and line up at the Start line before the race kicks off. This is where the wizardry starts to kick in. Anki’s cars are designed to keep themselves on the track and steer around corners themselves. 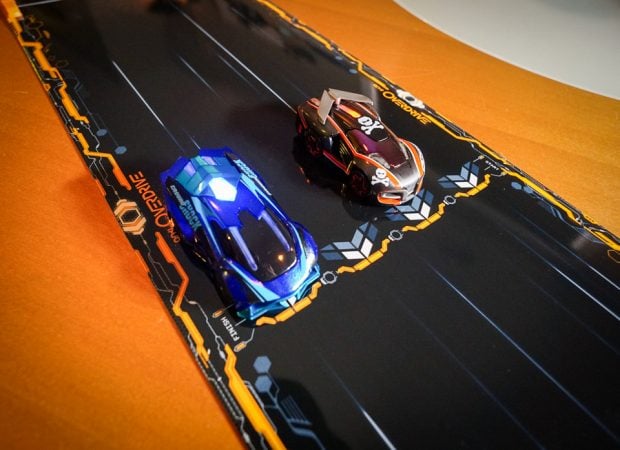 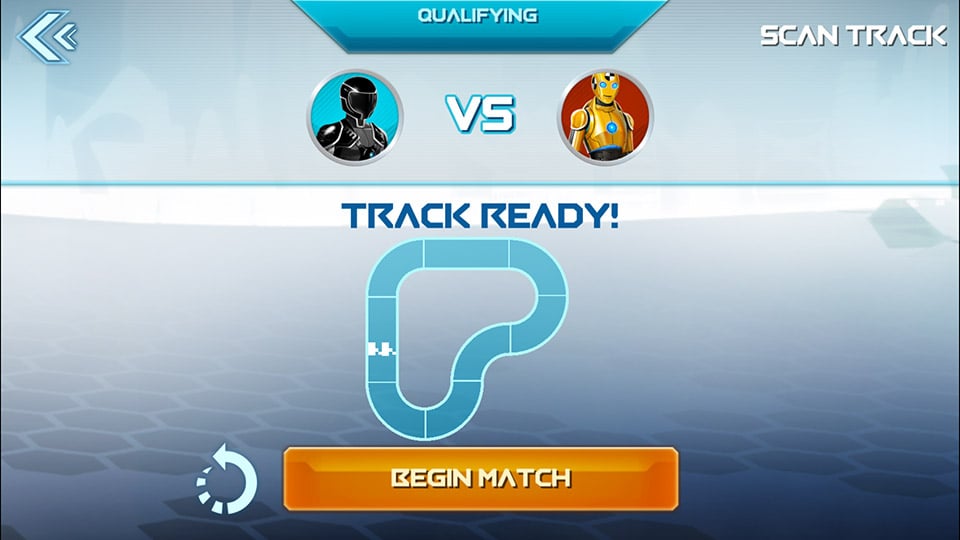 Driver controls are limited to choosing lanes, throttle, and weapons. For the most part, cars stay planted on the track, though in aggressive play, cars can occasionally leave the track, but that’s actually part of the game. The app can automatically detect when your car spins out, and score a point for your opponent. 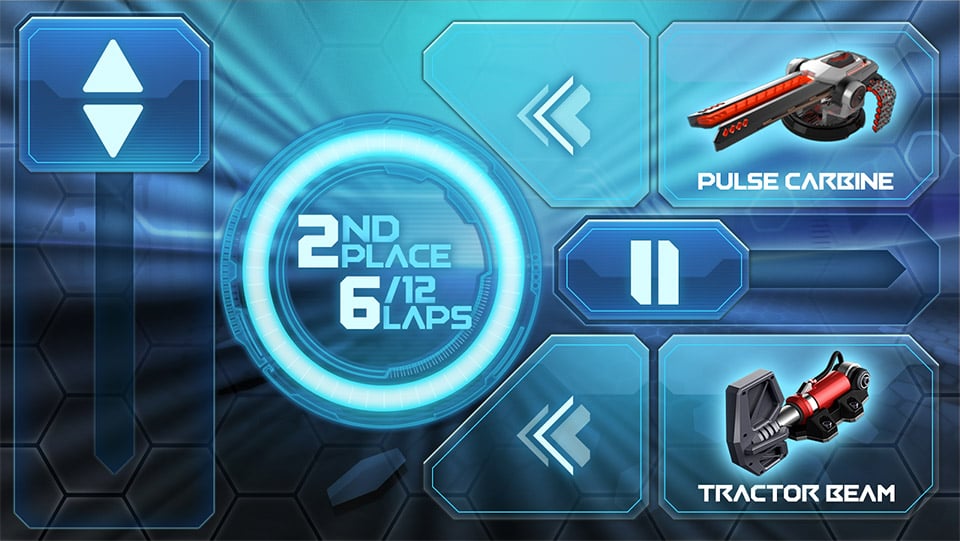 There are several different race modes, including Race Mode where you aim to be the first to cross the finish line, Battle Mode where the objective is to take down your opponent’s car with virtual weapons, Time Trials, and King of the Hill, which is all about maintaining the lead for the longest. Each car has its own personality, with unique driving attributes, weapons and attacks. I really want to try out the Big Bang and Nuke myself. 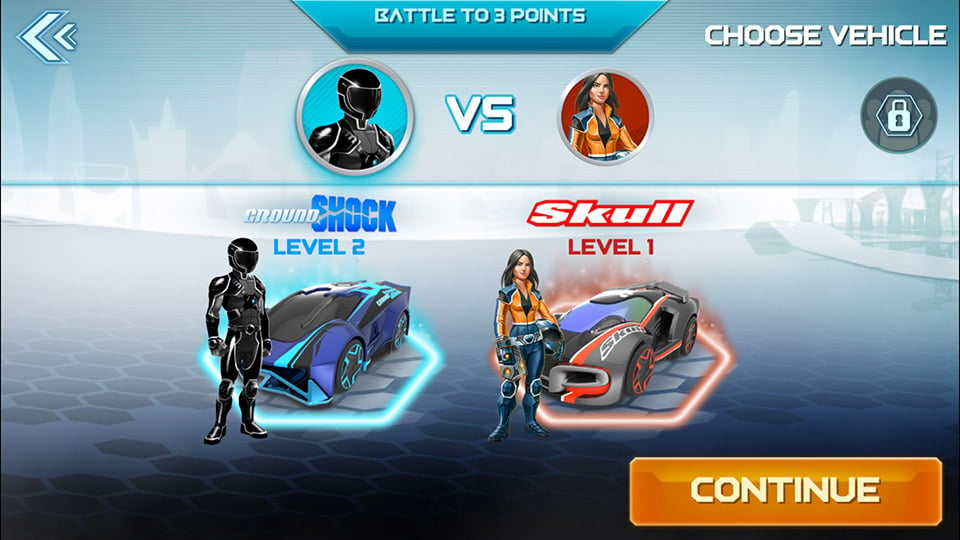 Overall, I think the Anki Overdrive set is a great high-tech plaything for both kids and adults. You’ll probably want to splurge for more track if you’ve got the space, and consider adding extra cars if you want to experiment with different weapons, or play 3- or 4-player rounds. 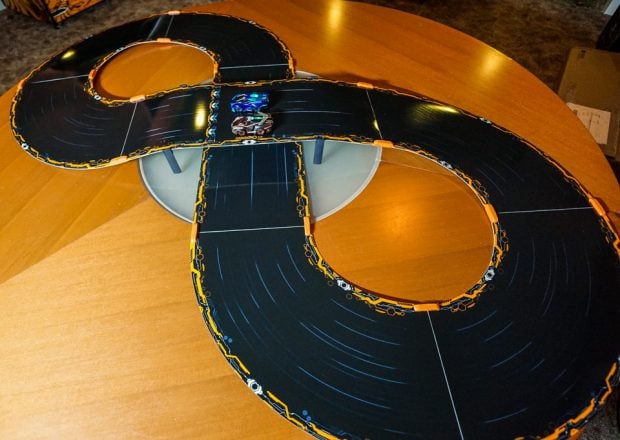 The Anki Overdrive starter set sells for $149.99 (USD), though you can quickly rack up several hundred dollars if you go for something like their massive Mega Bundle, which includes a whopping 33 pieces of track, four cars, a jump ramp, banks, and guard rails.