Barry Crawford said that when he was a kid, he dreamed of growing up to be a robot. Sadly, his childhood dream hasn’t come true yet. But he did become what he calls a “gizmologist”, making mechanical artworks, furniture and jewelry. His latest ongoing project is the Mechateuthis, a crank-operated mechanical giant squid. 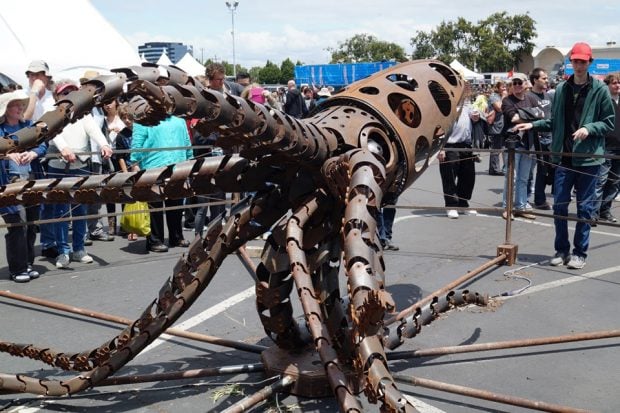 The Mechateuthis (named after the giant squid’s genus Architeuthis) may look like it’s made of old materials and found objects, but it actually has over 600 hand-fabricated moving parts. Its tentacles, beak and fin are operated indirectly by eight hand cranks that are situated on fence posts along its perimeter. An Arduino turns the motion of the cranks into signals for the sculpture’s motors, which in turn activate the various moving parts. Here’s Make’s interview with Barry at the Maker Faire Bay Area 2016:

Barry originally made Mechateuthis for Burning Man 2015. Here it is blowing people’s minds at Black Rock:

I’d love to see a desktop version of Mechateuthis. And a Godzilla-sized one.