Playstation VR Aim Controller: Why Couldn’t It Look Like an NES Zapper?

I’m gonna say right off the bat here, that yes, this Playstation VR aim controller is the ugliest peripheral you have ever seen. However, in VR you won’t even have to look at it, since you will be busy with the virtual world you’re playing in. This is Sony’s version of a light gun for their upcoming VR headgear, and will be the peripheral of choice for all of those VR FPS games you will want to play. 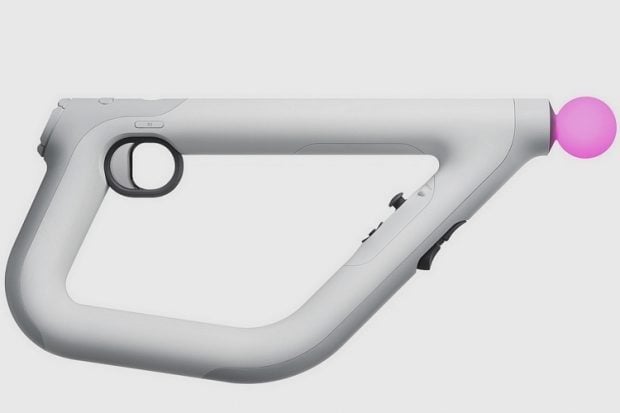 This controller offers direct 1 to 1 tracking, so that your virtual weapon is always aimed at the exact same place as your fugly plastic rifle. Sony claims that it will give you the most realistic and precise way to control a rifle in their VR platform. Still, I think Sony could have come up with a better design than a something that looks like PVC pipe bent into a gun shape, with Rudolph’s red nose on the end. At least it is cutting edge technology. The upcoming game Farpoint is one of the first to take advantage of the new controller:

Developer Impulse Gear, says that the rifle controller “allows you to do things in Farpoint that just are not possible in a standard FPS game.” We have no idea what they mean. Perhaps guiding Santa’s sleigh?