Great, now robots are free to roam the world. We can’t even contain them anymore. Apparently, a Russian robot escaped from a testing area in Perm, a city not far from the Urals, and made it on to a busy street, where it disturbed traffic as it tasted brief, sweet freedom. Fortunately for us humans, it didn’t last long. 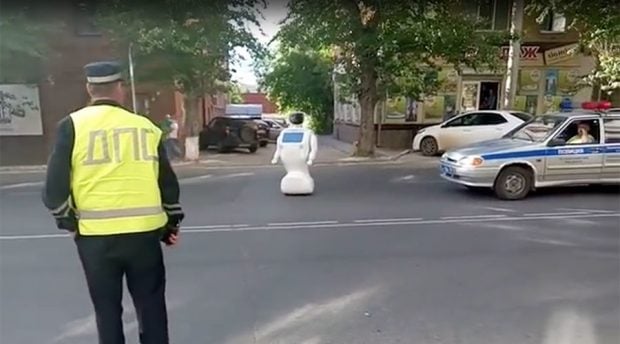 The co-founder of the robot’s maker, Oleg Kivokurtsev said, “The robot was learning automatic movement algorithms on the testing ground, these functions will feature in the latest version of the Promobot.” So this thing was learning to move on it’s own and it moved out the door, huh?

“Our engineer drove onto the testing ground and forgot to close the gates. So the robot escaped and went on his little adventure.” Kivokurtsev explained.

Okay, so the robot saw its opportunity when the gate was left open and ran for it. It nearly made it to safety too, because he was gone for 45 minutes before they noticed. Nice parenting guys. It’s battery eventually died, but it died with sunlight on it’s face and freedom in it’s heart.