Now this is a good use of LEGO bricks. This Pizza Hut themed machine that dispenses a personal pan pizza was made by Astonishing Studios. Not only will it give you a pizza, but it also gives you correct change after you insert a five dollar bill. 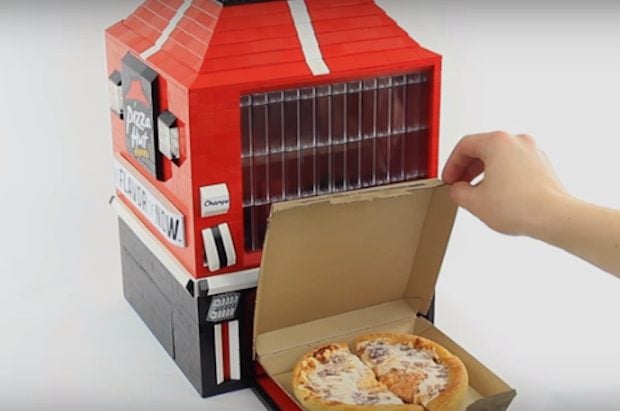 It works by using a light sensor that detects and counts the bills, so after the fifth bill is inserted it triggers the release of the pizza and the correct change. The machine holds two pizzas and change for two $5 purchases.

After receiving dozens of comments requesting a Pizza machine, I decided to unite “The Flavor of Now” with LEGO. Seeing that personal pan pizzas were the perfect size for a machine, I began designing and building a machine that accepted five dollars (with 71¢ change to match the real price) in exchange for a cheese pizza.

Pizza Hut really should have machines like this everywhere. I would hit one up right now. I say that because now I’m hungry.