Back in the day, I was rather obsessed with blimps. I thought they were super cool because they’re essentially a giant balloon you could fly under. Lockheed Martin has evolved the blimp into something called the Hybrid Airship, a massive flying vessel designed to carry lots of cargo to remote locations – and where it’s going, it doesn’t need roads. 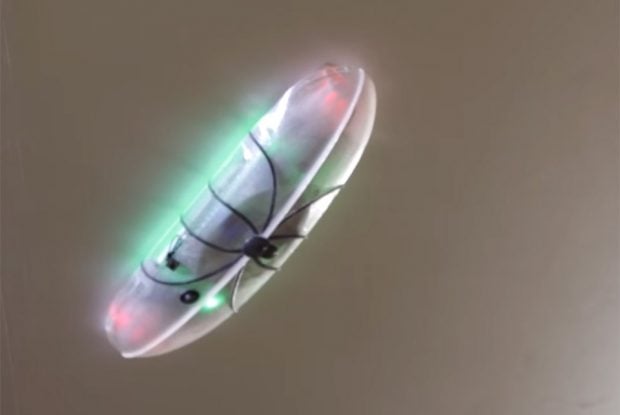 One challenge for Lockheed is how to inspect the massive envelope of the airship and repair any pinhole leaks. Originally, this involved a team outside the envelope with a bright light and a team inside the hole to patch any holes when the light shone through. Lockheed’s Skunk Works group didn’t like that approach and invented the Self-Propelled Instrument for Damage Evaluation and Repair, or SPIDER for short.

SPIDER is an autonomous robot with two halves that connect magnetically. One half rides outside the fully-inflated envelope while the other is inside. The outer half shines bright light on the envelope and when a hole is detected, the light bleeds through to the dark interior. The inner half sees that light and fixes the hole. If it detects and/or fixes a leak, it records this and sends images and report back to a central monitoring computer.

The spider bots work autonomously in packs to scour the entire airship and ready it for flight. I have no idea what the holes are patched with, probably duct tape.