If you have ever seen photos of NASA rocket boosters in flight or in testing, you know that all you really see is a bright orange flare. It’s impossible to make out much in the way of detail. NASA has a new camera system that is in testing meant to allow vastly more detail when looking at rocket plumes during tests. The camera system is called “HiDyRS-X,” an acronym that means High Dynamic Range Stereo X. 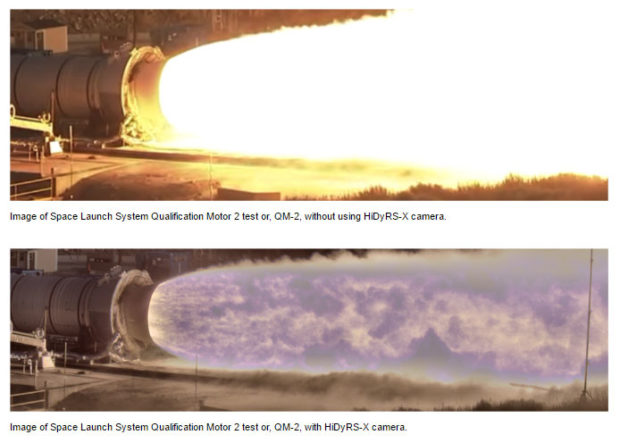 Recently the camera got its first big test while the SLS rocket booster was being tested. If you don’t know, the SLS will be the most powerful rocket ever when it goes into use. The booster for that engine was tested at the Orbital ATK facility in Promontory, Utah and the HiDyRS-X was tested right alongside. One glance at the image here and you can see that the new camera actually allows you to see the flames inside the plume rather than just an incredibly bright glow. The video shows even more detail.

The team had a couple issues during testing, with the first being an automatic timer that failed, so they had to start things manually, and then the rocket motor shook the ground so violently that the power cable unplugged from the camera cutting the images short. Whoops.