I’m moving to Colorado from Texas this week and we plan on doing lots of outdoor activities in our new state since we can actually go outside without bursting into flames. I freely admit that I am worried about bears. I mean I don’t want to kill anything, but I also don’t want to wind up as incredibly handsome bear poop either.

I know bear spray is said to be the ticket, but what if that just pisses the bear off? Maybe I can make myself feel better with this LEGO gun. This amazing replica by ZaziNombies looks just like the Jesse McCree Peacekeeper revolver from Overwatch. 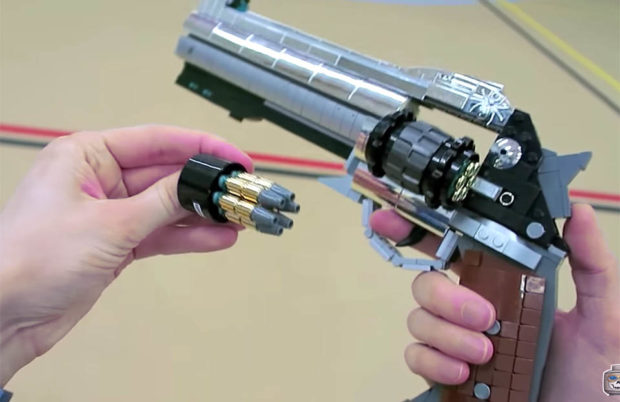 Even if it won’t kill an attacking bear, I can throw it under his furry bear feet and slow him up enough to trip some other poor bastard of a hiker while I abscond. Stepping on LEGO bricks is pain right up there with a kidney stone or getting kicked in the balls by Chuck Norris. Surely bears aren’t immune to that level of pain.

I really want it and I wish it would shoot bricks from its blocky barrel. Check out the video whilst I go Google how to not be eaten by a bear while hiking.