Speeding tickets suck. It’s not just the cost of the fine, but the potential for insurance increases, and the inconvenience of time spent either fighting the ticket and/or going to traffic school. But speeding tickets aren’t just something that leadfoots get. Simply keeping up with the flow of traffic often means you’re exceeding the posted limit, and it’s also pretty easy to go over if you simply missed the speed limit sign. In fact, the last time I got a ticket, it was just that situation. The highway speed limit had decreased from 70 to 55, and I got a $300+ ticket for going 66 in a 55, plus I was driving on a ticket for 6 weeks waiting for my license to be mailed back to me. That was the moment when I realized that a radar detector was a must have.

I’ve been using windshield-mounted detectors for a while now, but every one that I’ve used tends to false alarm all the time – especially in urban areas, and near shopping malls and banks. They’re also pretty unsightly, hanging off your windshield from a suction cup with a cord dangling down to your lighter. You also have to remember to hide it away every time you park, or else it could be an attractive opportunity for thieves. The best way to avoid all of these issues is to go with a built-in system, like the ones from K40. In my case, the unit I had installed was the K40 RL360i Expert, along with the companion Laser Defuser Optix system. 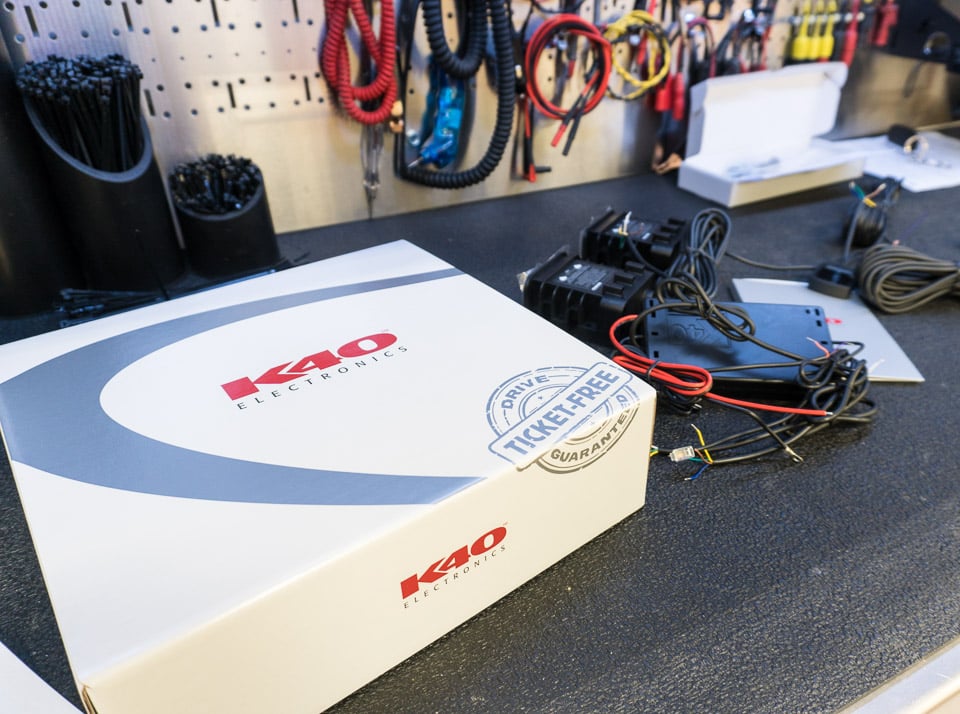 K40 isn’t just known for its technical chops, but also for its extraordinary “Ticket-Free” guarantee. The company is so confident in their products that they warrant that if you get any tickets within the first year that you own a K40 system, they’ll pay it for you. The guarantee doesn’t cover DUIs, school zone/construction zone tickets, or lawyer’s fees, but it’s still pretty impressive. 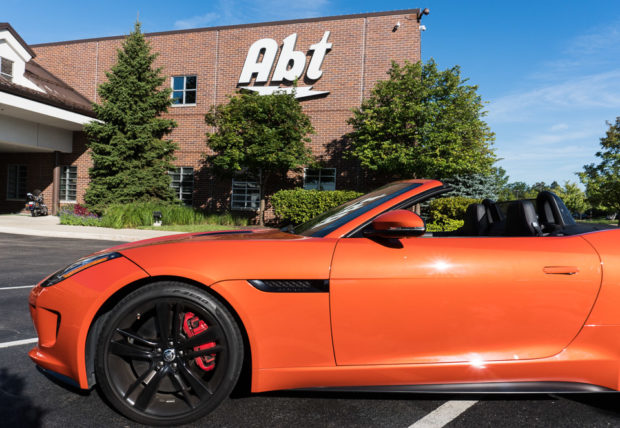 For my install, K40 recommended Abt Electronics in Glenview, IL, which made me very happy indeed. Abt is literally my favorite electronics retailer on the planet – and they’re just 30 minutes up the road from my house. The mobile install department got me set up with an appointment quickly, and told me to expect that it could take up to eight hours. I figured I’d stick around for the more interesting parts of the install, but of course you don’t need to do that. If you do wait around, you’re likely to spend some money on some other gadgets in Abt’s awesome showroom. 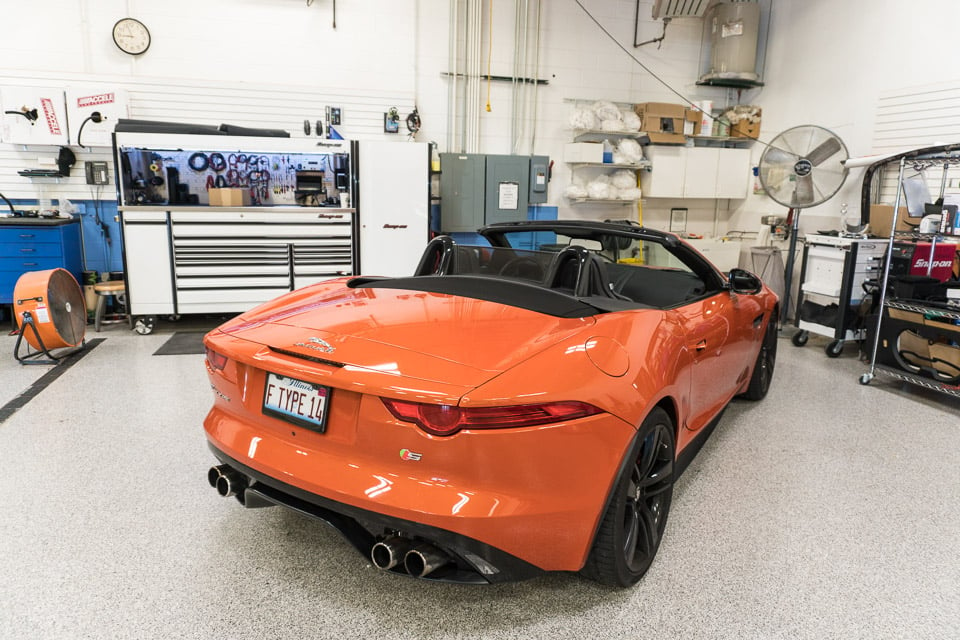 My installer, Eric first covered up the seats, doors, and sills with protective cloths, then walked me step-by-step through what he’d be doing to my prized Jaguar. He showed me where the radar sensors would be placed, as well as the laser defusers, and we collaborated on where to put the remote controller inside the cabin. 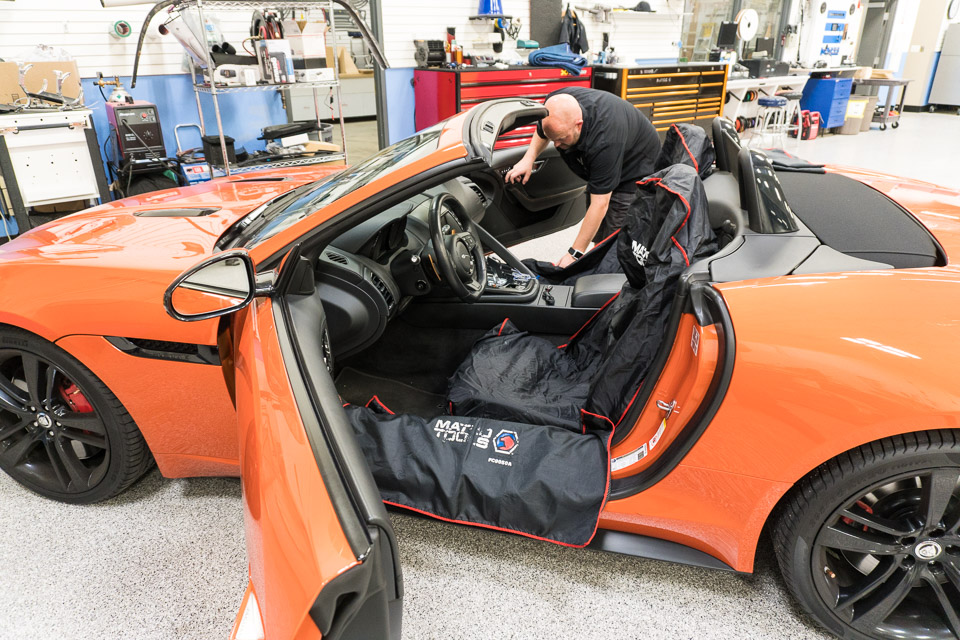 The RL360i system consists of several components, including front and rear radar receivers, interface and host boxes, a GPS module, a speaker, and a pair of LED indicators. My system also has a pair of optional Optix laser defusers. 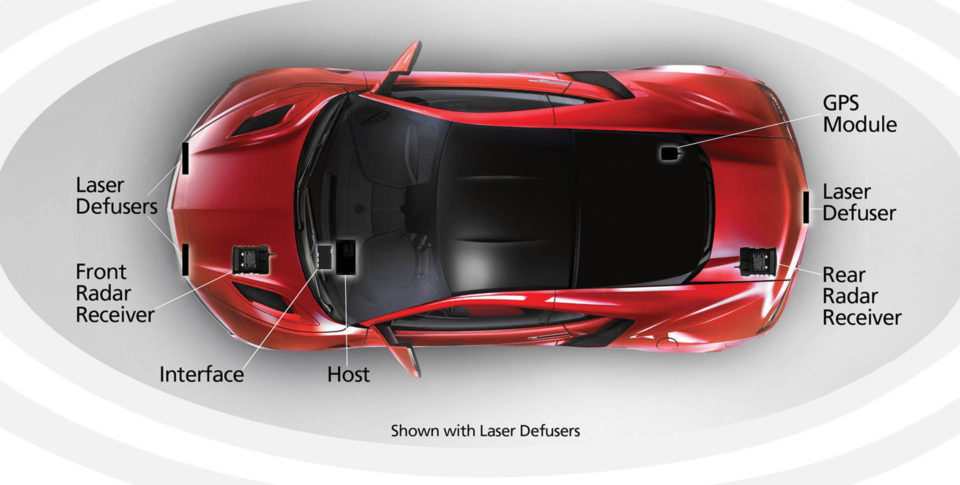 The objective of any K40 install is to hide as many components as possible, and Eric did a great job doing this. He cleverly figured out that he could install the front radar detector behind the front bumper by turning the wheels and removing a protective cover inside the wheel well. This meant he didn’t have to rip apart my front bumper – which saved installation time, and also decreased the risk of damage to my car. 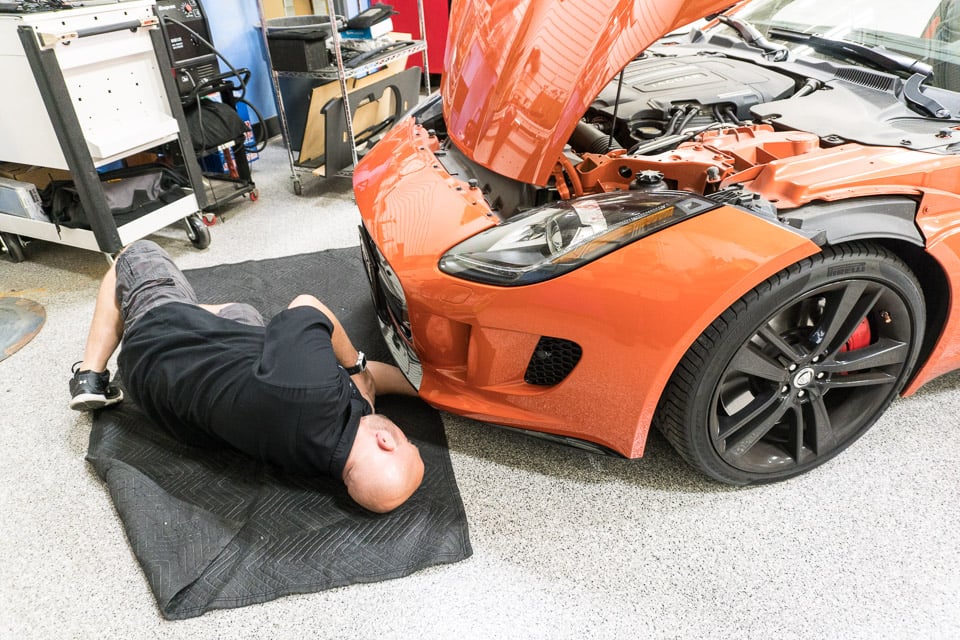 The front bumper also serves as the mounting location for a pair of laser defusers, which flank the license plate, and adhere using extra strength industrial adhesive. 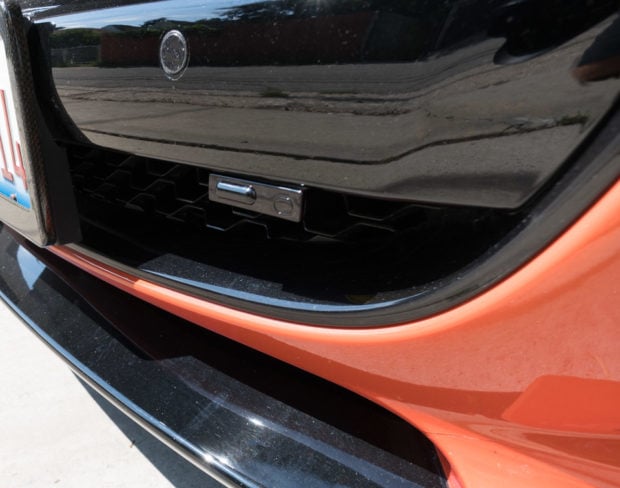 These are the latest generation Optix laser defusers, which not only are very small and discreet, but they do a great job confusing even the most up to date laser guns. The defusers offer three modes, one which remains on at all times, another which only stays active for 10 seconds after detecting a laser signal, then shuts down for 30 seconds, allowing you to slow down and the police to get an accurate reading at a lower speed once you’ve slowed down. This reduces suspicion that you’re operating a laser jammer, which are prohibited in some states. The last mode simply turns them into alert only detectors. 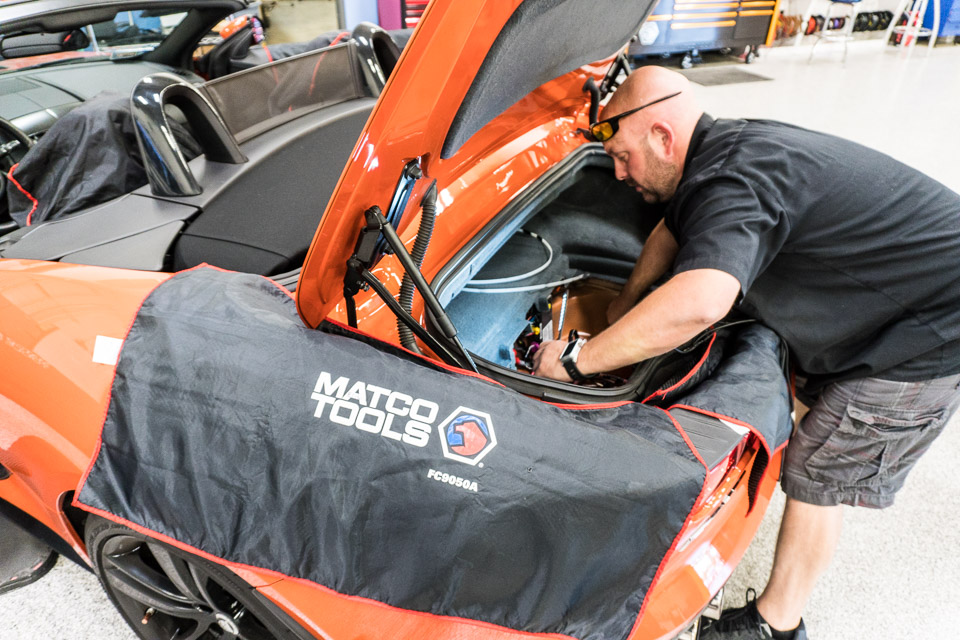 To ensure stable and sturdy mounting of the rear radar sensor, Eric even fabricated a custom metal bracket. 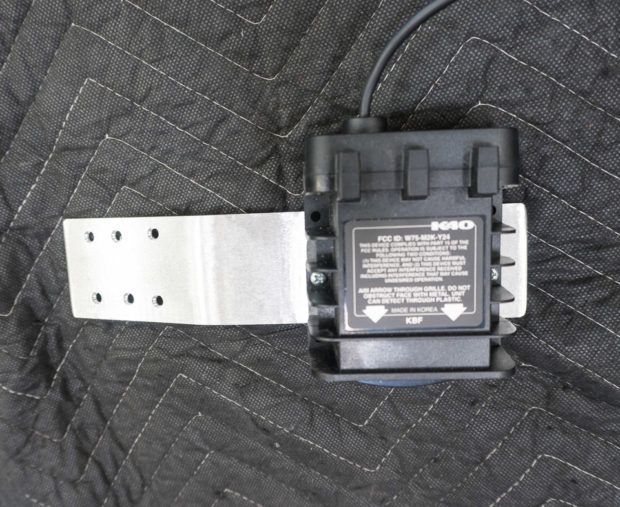 Once the radar sensors were installed in the front and rear of the car, Eric neatly wired up the system, and mounted the system’s main brains and speaker under the dashboard. 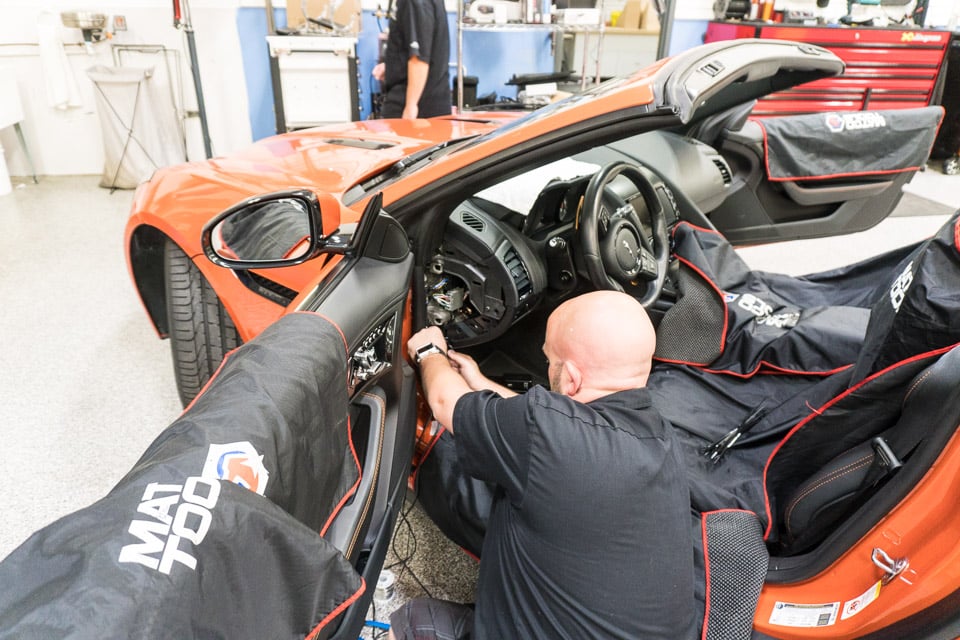 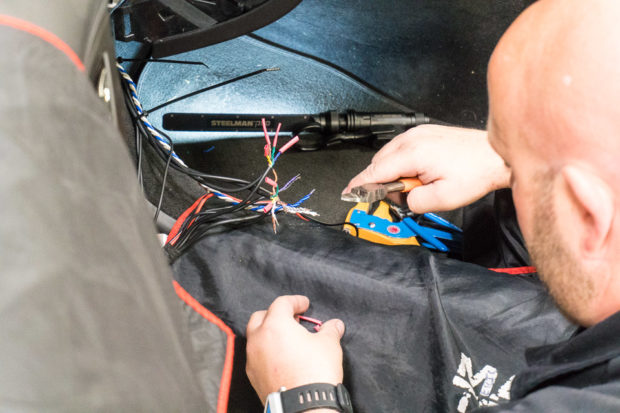 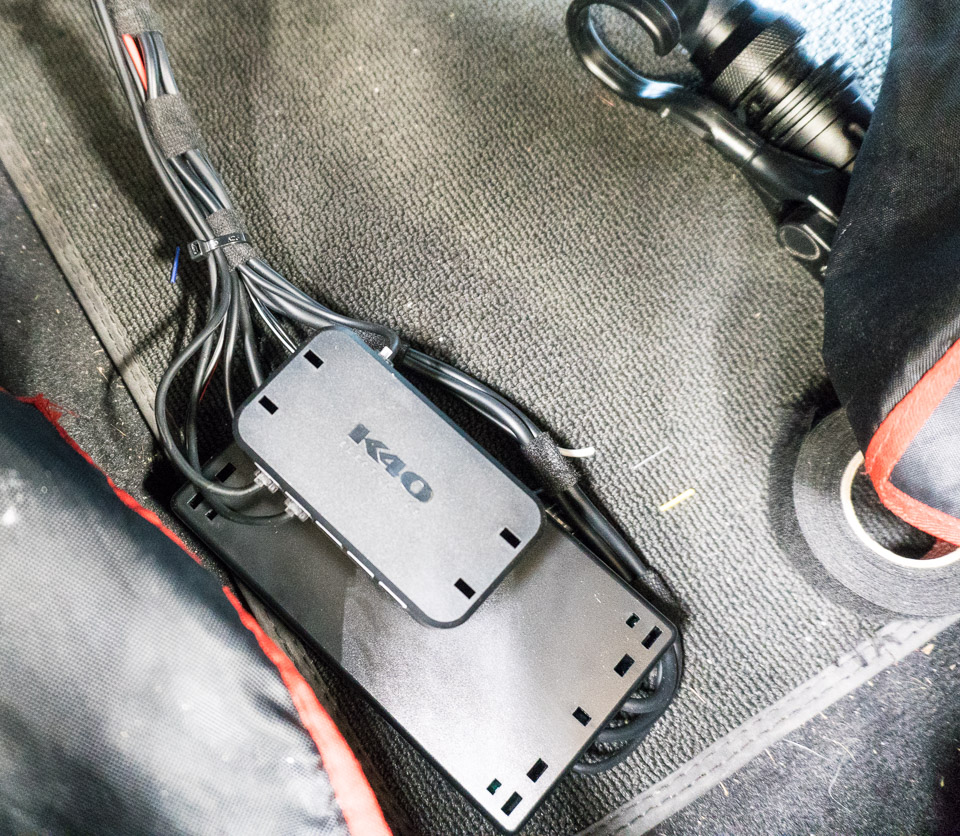 He also did a great job installing the expert remote panel, which I decided would look best flush-mounted on the underside of the ceiling light panel. Seriously, this looks like a factory job, doesn’t it? 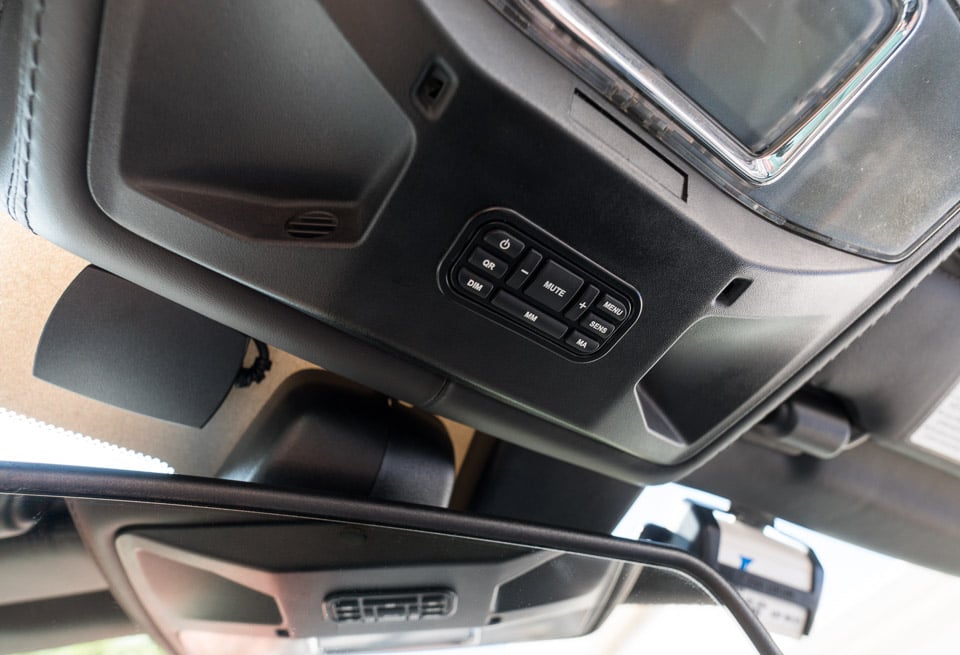 You know the pair of LEDs I mentioned earlier? Those serve as the indicators for visual alerts. The guys at Abt flush-mounted them neatly above my speedometer and tachometer, so they really catch my attention while driving, but also virtually vanish when not illuminated. The alerts are simple, yet effective – the left LED lights up for front radar, and the right lights up for rear. Both will flash if laser is detected, or as radar passes from front to rear. The LEDs only light up in blue, which is fine, but I’d love it if they lit up in different colors based on whether the alert is X, K, Ka or Laser. 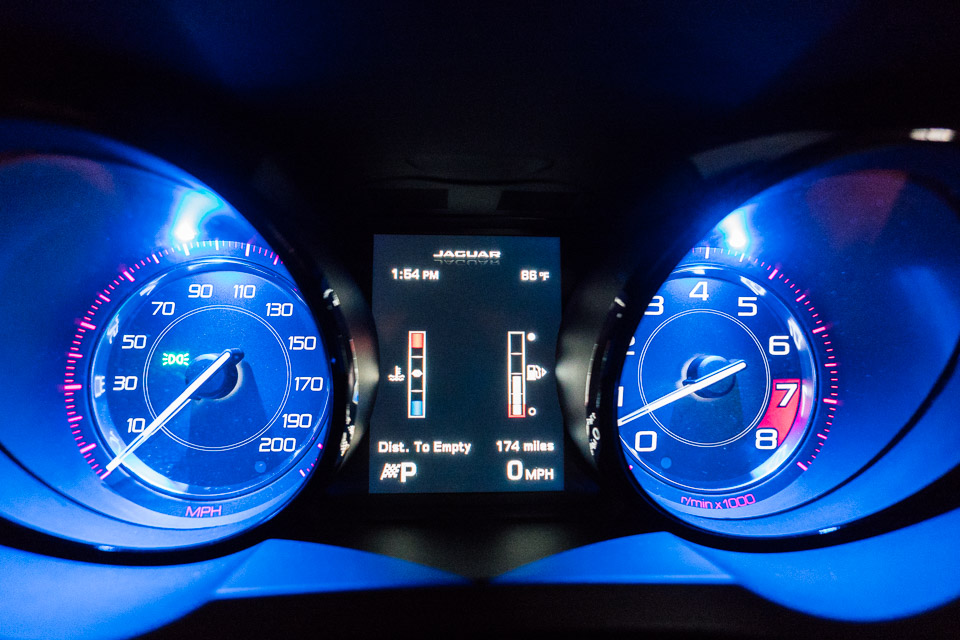 Once the install was complete, Eric performed a series of tests with both a radar gun and a laser emitter to verify that everything was working properly, and walked me through proper operation of the system. He also recommended that I call in to K40 afterwards, as they often can offer up additional tweaks based on your driving habits.

K40 is renowned for their excellent customer support, offering one-on-one phone consultations for potential buyers, as well assistance with configuration and ongoing 24/7 support. If you call K40, day or night, you’ll get an actual U.S.-based human being on the phone – and one who really knows what they’re talking about. This level of service is exceptional in this day and age of endless menus and outsourced call centers in some far off land. My contact, Brian, walked me through each and every menu option on the system, ensuring that they were configured based on my specific needs, and also gave me his direct line in case I ever need any other help.

The installation and setup process certainly were impressive, but the proof is in the pudding with a radar detection system. In the days since my install, I’ve put about 500 miles on my car, in and around Chicagoland – on city streets, country roads, and speedy highways. The first thing I noticed (other than the lack of an ugly radar detector hanging from my windshield) is how infrequently the K40 system goes off. And that’s a good thing. Rather than constantly hitting the mute button and playing “the boy who cried wolf” like my previous radar detector, the RL360i is much more selective in when it goes off. Between its excellent filtering of noise, and the ability to automatically mute alarms when driving below a speed of your choice (I have that set to 30 mph), my city drives are now much more pleasant.

Alerts come in the form of a voice, as well as a tone, and the aforementioned lights. These are all user configurable, and you can adjust volume, brightness, and even whether the voice is male or female from the remote control. The remote also lets you mark locations where you don’t want an audible alert (i.e. a false alarm location), or mark locations where you always want an alert (i.e. a school zone). There’s also a mute button, but I just set it to auto mute, which turns down the volume after an audio alert, but continues to show a visual alert.

Out on the open road, the handful of times I got an alert, it was from an actual police car on the side of the road. In each case, I had at least a mile to slow down and correct my speed. There was just one instance on the highway when the alert went off and I saw no police – and that alert only lasted about 3 seconds.  Of course, no radar detector is 100% infallible against false alarms, but the K40 system is the best I’ve ever experienced at this, and my confidence level in its ability to alert me to real concerns is very high. Unfortunately, I couldn’t find any police who would play ball with me to do an accuracy test, but Judie over at GearDiary managed to test her system in a more controlled setting than I could:

Overall, I’m very impressed with the K40 RL360i system. Their pre-sales and support customer service is impeccable, and the guys at Abt Electronics did a fantastic job with the installation. The system is extremely well concealed in my car, and I no longer have to worry about wires, suction cups, or theft. Perhaps what makes the K40 system most impressive is what it doesn’t do – false alarm. No longer does every strip mall, bank, and toll plaza make my head spin with beeps and bleeps. Instead, I’m alerted when there’s an actual radar or laser gun in use, which makes me much more likely to slow down and pay attention, and therefore less likely to get a ticket. And their “ticket-free” guarantee just gives me that much more peace of mind.

Base price for the K40 RL360i Expert system is $1699.95, plus the cost of installation. Pricing for the Optix defusers was not available at press time.

Technabob was provided with the hardware tested in this review by Dell at no cost. However, all reviews on Technabob are the unbiased and honest opinions of our authors, and in no way represent the views of the product manufacturers represented here.