This Humanoid Robot Does Pushups, Sweats

One of the major problems with robots is heat. If things get too hot it can start to affect performance. And while robots have a variety of active cooling systems, they can always be improved upon. That’s why researchers at the University of Tokyo’s JSK Lab are experimenting with using sweating as a cooling concept for their Kengoro humanoid robot. 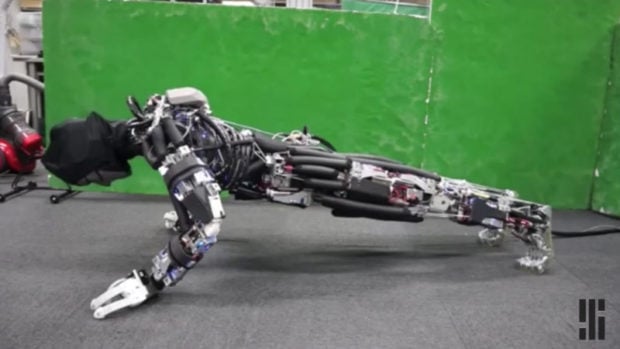 The roboperspiration is deionized water that drips onto Kengoro’s 108 motors, cooling them down through evaporation. Sweating allows the robot to do push-ups for 11 minutes without overheating, which is pretty impressive. Your robot at home can’t do that. It’s even more impressive when you consider that it can run for half a day on just one cup of water. Can you even do that?

Kengoro has no skin, so it sweats from its skeletal structure. The skeleton is made by laser sintering, a process similar to high-end 3D printing that allows metal of various densities to be built into complex shapes. Channels of less dense aluminum run through Kengoro’s frame which act like a sponge, retaining water and making sure the “sweat” drops onto the motors instead of all over the floor. It’s an amazing design.

Well, if they are going to kill us one day, at least they will have to work up a sweat while hunting us down.