I have to work from a laptop every day and it really sucks. The screen is too small and I end up having to scroll to see all the text and controls for many apps and websites. If you want a bigger screen for on the go use, something new has turned up on Kickstarter and looks pretty awesome. The product is called The Spontaneous Pop-Up Display (SPUD), and it’s part computer monitor and part umbrella. 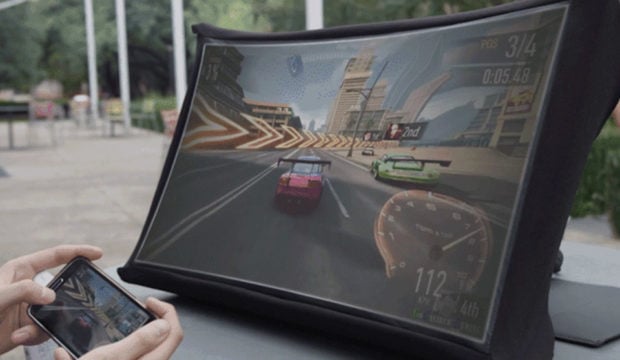 SPUD is 24-inches diagonally and it uses a short-throw rear projector and popup screen that folds like an umbrella. When collapsed it is about the size of a paperback book and weighs less than two pounds. That means you can carry a complete 24″ monitor in your backpack

The projector is a DLP unit good for 1280 x 720 resolution – which isn’t bad, but full HD would be better. The makers of SPUD found a special projection screen material that won’t crease or wrinkle when folded, so you don’t have to worry about that. The projector has brightness up to 785 nits and battery life around three hours per charge. It even has internal speakers for sound.

Currently, SPUD will cost you $374(USD) with shipping estimated for June 2017. Head on over to Kickstarter if you want to get in on this one.