World’s Largest LEGO Ship Made from Over 1 Million Bricks

DFDS is the largest shipping and Logistics Company in Norther Europe. They are celebrating its 150th anniversary in style by building a giant LEGO ship! The employees created the world’s largest LEGO ship, named Jubilee Seaways using 1,015 million bricks. That’s like an aircraft carrier to minifigs. 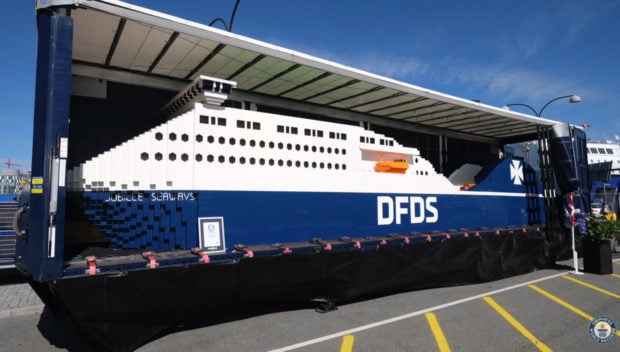 And they’re not just saying it’s the world’s largest. That’s certified by the folks at Guinness World Records. You can check out Beyond the Brick’s video below where LEGO artists Warren Elsmore and Julie Broberg of DFDS explain the process of building this massive model. It took over 900 hours to build this 39+ foot-long, 8.9 foot-tall, 2.2 ton ship, or you can just cut to the chase for a time-lapse of the build in the second video.

A build this size took several different groups working on sections of the ship. When it was done, the entire thing was assembled in Scotland. Because it is so heavy, the ship is built around a steel-frame and is inside a trailer that lets them move it to different locations. It is currently on display at Brick Live Birmingham 2016 if you are in the area. Congrats to everyone who made LEGO history.