The drone market is pretty jampacked these days, so it’s pretty tough to decide which one to buy. While there are some great high-end models for advanced flyers and aerial photographers, they have a tendency to cost $800 to $1000. For entry-level flyers who want to get started quickly and easily, there’s the Yuneec Breeze 4K, which can currently be had for half that price. 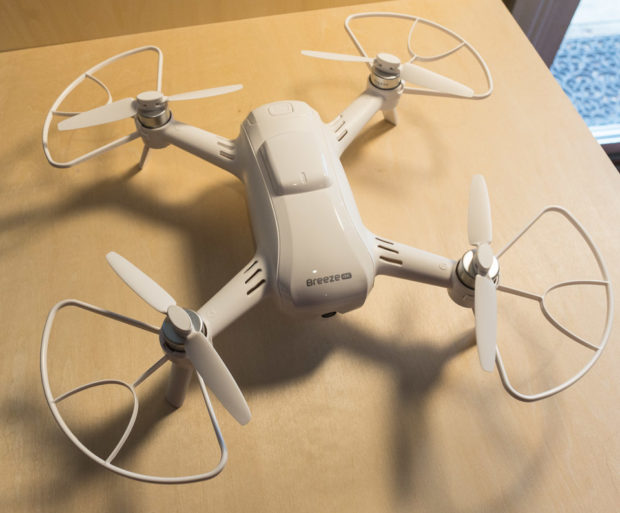 Measuring in at less than 8″ square when folded up, this compact drone is smaller than most of the models I’ve used before, which makes it easy to carry around. It packs down neatly in the included carrying case, thanks to its folding propellers and snap-on blade guards. There’s even enough room in the box for an extra battery. 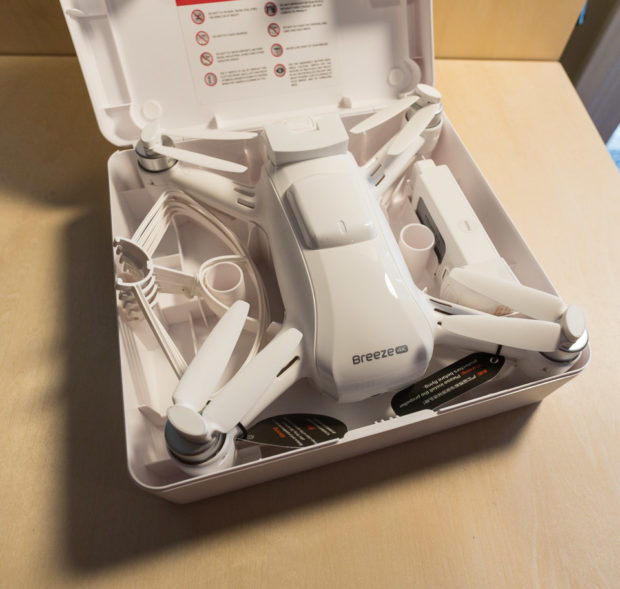 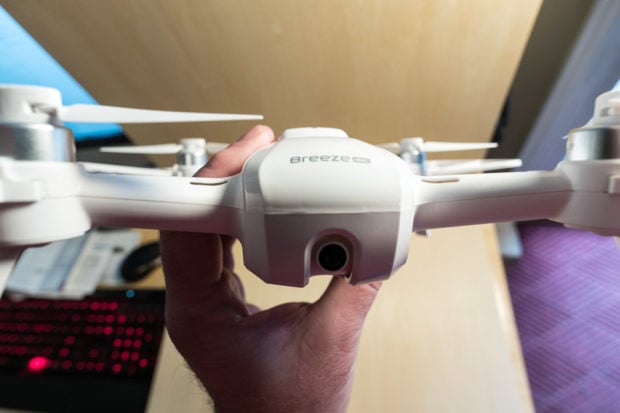 On the bottom of the drone are infrared positioning sensors, which help to keep the aircraft properly positioned, reducing drift while in flight, and making for perfect landings every time. These work in concert with GPS to help track your drone’s flight path. That said, the Breeze can safely be flown indoors as well, but without GPS capabilities. 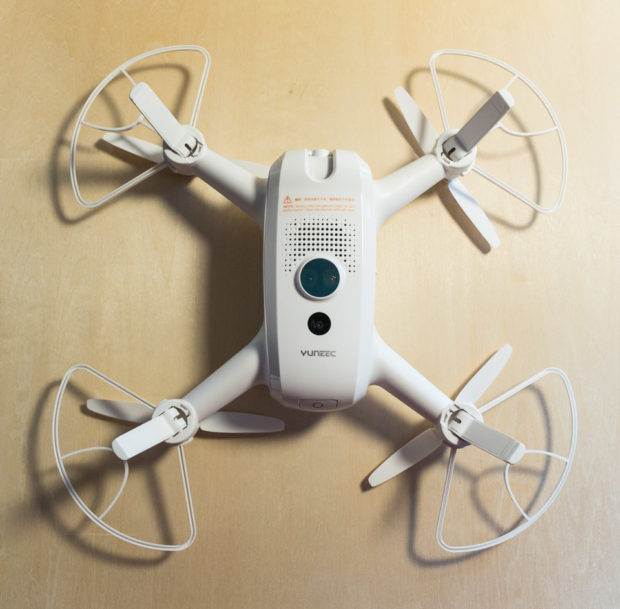 To make things super simple, the Breeze offers several easy-to-use modes so you can get up and running in minutes, and without any real learning curve. Simply put, the Breeze is the easiest to fly camera drone I’ve ever used.

Set up is easy – you just install the Breeze app onto your smartphone, then pair the drone via Wi-Fi. You’ll also want to let it install any updated firmware, and go through the brief compass calibration to ensure perfect flight. Once you do this, you’re up and running in seconds. 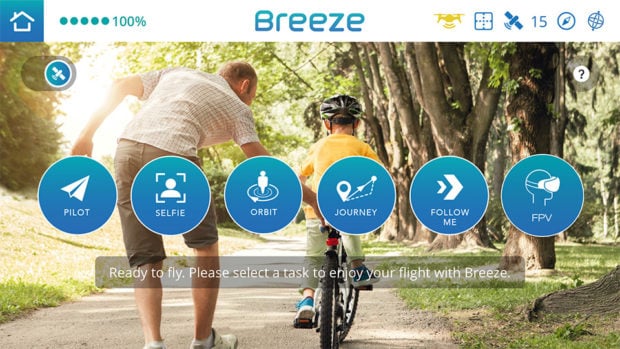 The Breeze includes six modes: Pilot, for flying where you want to go; Selfie, for snapping pics of you and your friends; Orbit, for flying in a circle around your subject; Journey, which flies away from your subject and then back; Follow Me, which follows a subject; and FPV, for flying from the drone’s point of view. All modes relay a live image of what the drone’s camera is “seeing” to your smartphone. 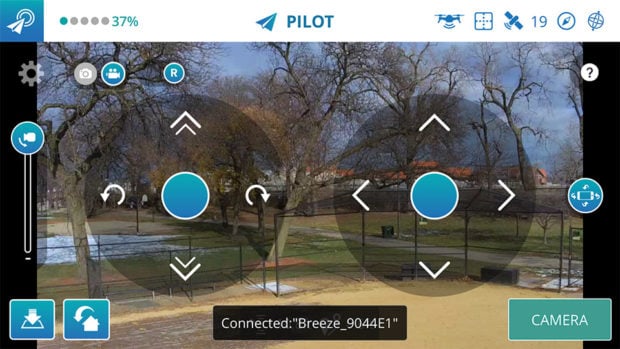 In pilot mode, the Breeze comes with a pre-set geo fence which ensures the drone won’t fly too far away. This is adjustable with a maximum height range of 9.8 feet to 262 feet, and a maximum distance range from 32.8 feet to 328.1 feet. You can also set the default take-off height and distance which controls where the drone will hover, and the center point when you use its Selfie, Orbit, or Journey modes. There are also simple “return to home” and “land” buttons which bring the drone back to you and land it safely. 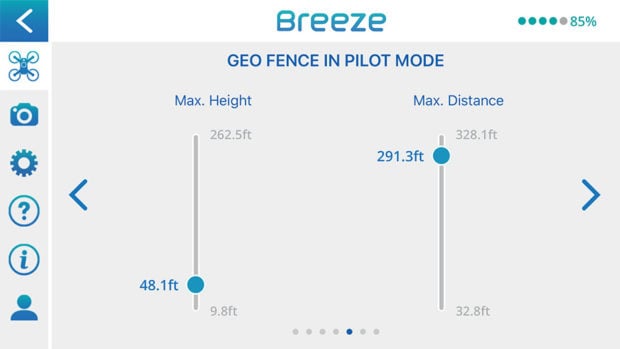 I tested all of the modes other than FPV, since I didn’t have Yuneec’s recently announced FPV goggles and controller on hand to really do it justice. Rather than write about each of the flying modes in depth, I put together a brief demo clip which shows off how they really look on video. Keep in mind that everything you see in this video was done without any meaningful practice, and without having to read a thick manual or take any flying lessons:

Overall, each mode worked as expected, and was easy to control using the on-screen directions. I encountered just a few small quirks. I found that the Follow Me mode would occasionally lose track of me – so I’m not sure how well this would work with a fast moving subject; also, the Journey mode worked best with low angle shots – the trajectory of higher angle shots would sometimes introduce a little bit of shake due to wind currents. Still, the overall flying experience was excellent, and Pilot Mode is predictable and lets you capture awesome shots like the low angle ones at the 1:14 mark in the video.

I also snapped some photos using the still camera, and found image quality to be quite impressive, with excellent detail and color reproduction. I’m not sure how often most people need to shoot aerial still images, but the Breeze definitely does a good job at it (click to see the original hi-res images): 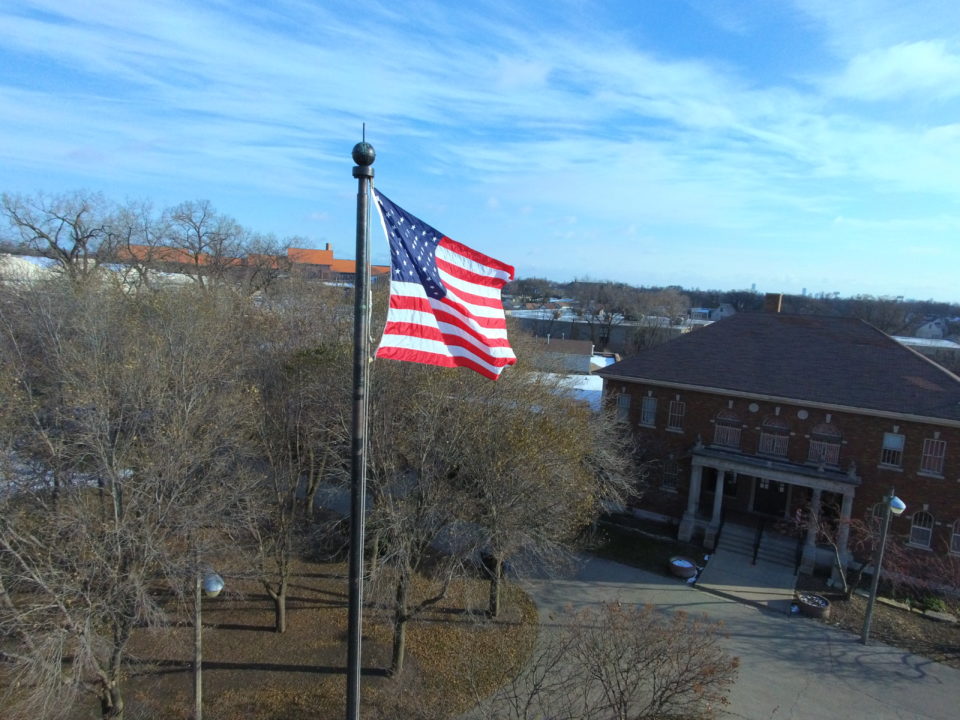 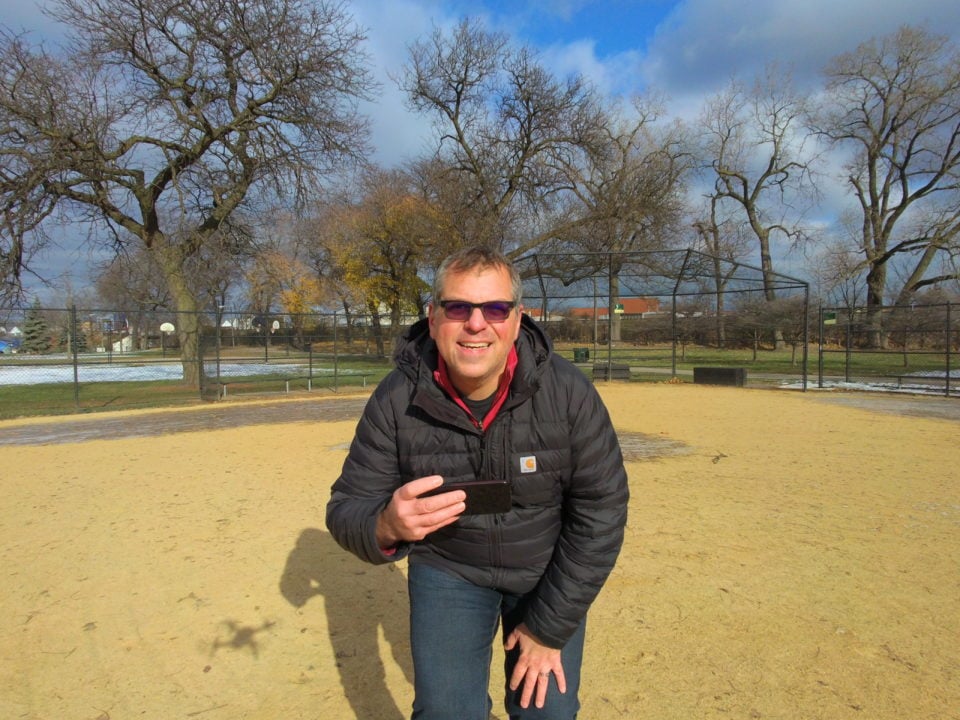 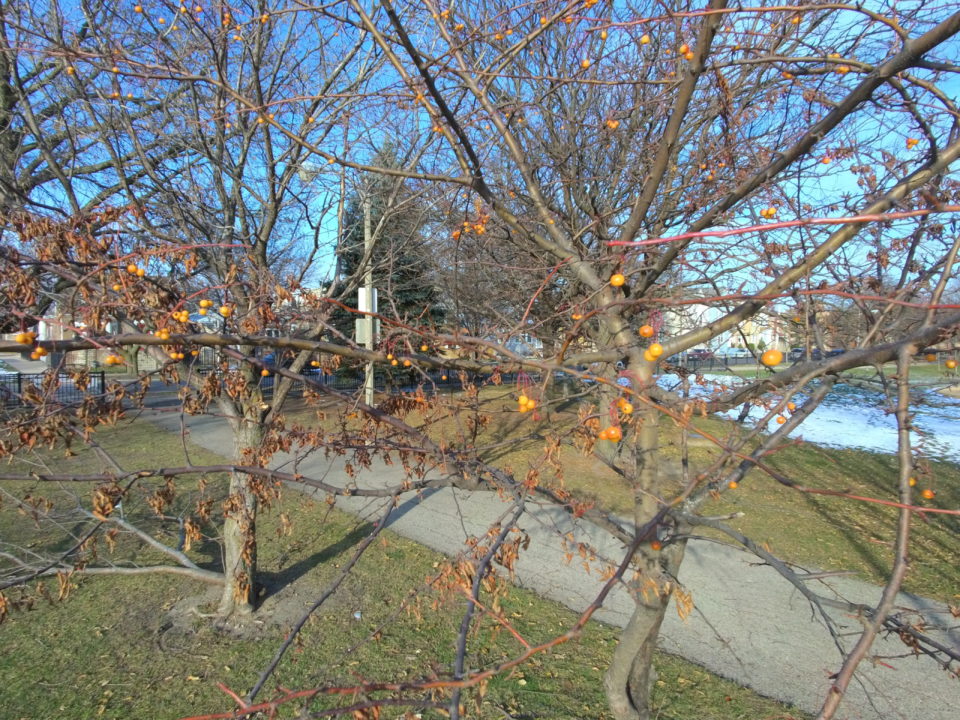 While the Breeze is technically a 4K drone, it has no optical image stabilization, so footage shot in 4K is sharp, it’s pretty unusable since even the slightest breeze makes the footage shaky. On the other hand, the 1080p footage is digitally stabilized, making the footage much more usable, but it has a tendency to be muddy compared to the 4K video:

That said, I think Yuneec really should downplay the drone’s 4K capabilities. The stabilized 1080p mode is definitely the best for most situations, and it comes as the default setting for that very reason. I suppose you could do some post-production stabilization with the 4K footage, and it might be better. One other thing to keep in mind with the Breeze is that its storage is fixed and not upgradeable. There’s 16GB of storage built into the drone, and files can be copied to your smartphone wirelessly and shared immediately, or can be transferred to your computer by plugging in a microUSB to USB cable (included), and copying files just like you would from a digital camera. I found this suited my workflow best.

In terms of battery life, the Breeze offers 10 to 12 minutes of flight time per battery. That’s not too bad, and they do include a second battery in the box, so you can always have a spare at the ready. Changing batteries is simple. Just push in the button and slide the pack out of the back of the drone. The included charger will reload a battery in 30 to 40 minutes. 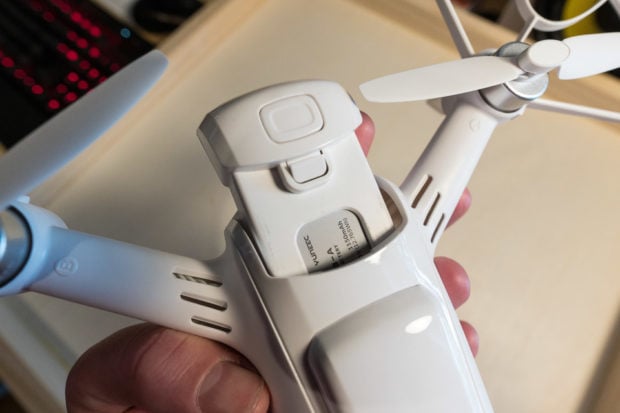 Overall, I think the Yuneec Breeze is a great drone for anyone interested in getting into aerial photography and who wants to build their flying confidence. It’s shockingly simple to fly, and captures better video quality than the myriad “cheap” drones which have flooded the market of late. That said, its digital image stabilization does limit its potential for capturing professional quality video. I’m hoping that a future model offers a tiny gimbal for true optical image stabilization of its native 4K camera. 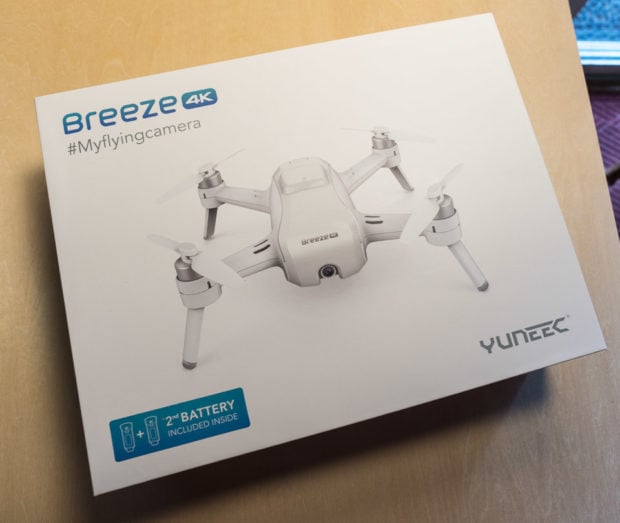